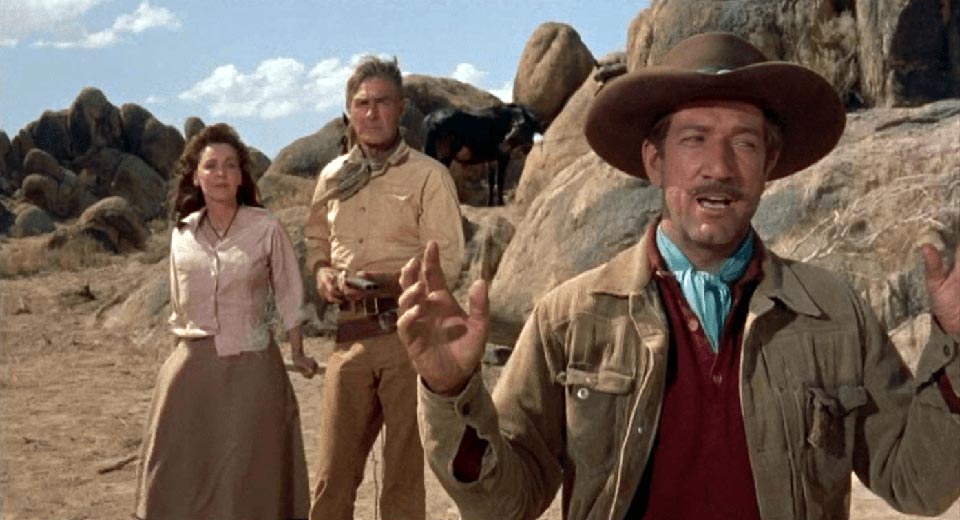 At its start, The Tall T appears to deliberately invoke the opening of Shane, with a young boy spotting a stranger on horseback approaching the family ranch. Shane rides through verdant valleys in the shadow of majestic mountains, accompanied by bombastic theme music, but this man rides along spare and dusty desert plains punctuated by ethereal rock formations, while the music is lilting and restrained. “Let him come” the boy’s father says of Shane, his savior—and emasculator. Here, instead, the father preemptively grabs his rifle before laughing at his folly: for it’s not a mysterious stranger after all, but only harmless Pat Brennan (Randolph Scott), an avuncular retired ramrod. The young boy will not implore him, as he did Shane, to teach him to shoot a gun, but instead will dispatch him to bring him candy. By the time Brennan returns with it, the boy and his father’s bloody corpses will be at the bottom of a well.

Undermining the very notion of the western hero is a quality that marks all seven of the Boetticher/Scott collaborations known as the Ranown Cycle, of which The Tall T is the second. Brennan may not be Shane or Wayne, but he is well-liked because he is affable; respected, but as a subordinate, which perhaps accounts for his plastered-on smile that seems to betray bitterness—while Scott’s bland but amiable screen presence is continually threatened by more engaging character actors standing next to him. Brennan is not a rugged loner, but, as everyone calls him, just “lonely”.

Brennan hitches a ride on a private stagecoach with a pair of newlyweds: the wealthy but “plain as adobe wall” heiress Doretta Mims (Maureen O’Sullivan) and her gold-digging cad of a bridegroom (John Hubbard). Mistaken for the mail coach, their stage is held up by Frank Usher (Richard Boone) and his two thugs, the psychotic Chink (Henry Silva), who murders the (clearly drunk) driver, and the dimwitted Billy Jack (Skip Homeier), who helps himself to the dead boy’s candy – all three prone to flights of countrified wisdom more poetic than anything Brennan has to say. As Brennan and the Mims’s are about to be executed—”that well’s gonna be chock-full!”—Mims’s husband, the film’s real villain, suggests that his new bride is actually a fortuitous find for the gang. “You’ve got the daughter of a millionaire! What do you suppose he’d pay to get her back?” While he rides back with Billy Jack to arrange the ransom, Doretta and Brennan are held hostage in a hillside cave, where the final half of the film takes place.

Brennan is clearly no match for Usher, much less the entire gang, but his salvation is that Usher, like everyone else, has a soft spot for him. “Plain-face truth is I like you, Brennan.” He can’t say the same about his own minions: “I don’t like them. Always talking the same words: women, drinking and the such.” Boetticher himself described the film as a “love story” between Brennan and Usher, and though he explained this by way of their mutual respect for each other, there are intimations that Usher has deeper feelings for Brennan. Beyond despising his gang’s talk of women—”I ain’t narrow-thinking, but a man gets tired of that”—he alludes to his unjustly sullied reputation back home despite having “never tripped a hammer on a man in my life.” Repeatedly inquiring about Brennan’s ranch, it’s almost as if he’s asking if he can come and live with him.

Brennan himself is never so gracious with his fellow hostage Doretta - only a Boetticher hero would be charged with rescuing "the plainest female I ever seen," an “old maid” whose appearance everyone mocks. Despite the love story that he’s forced to play out with her, his way with her is brutish and awkward. It’s not clear if he’s seducing her in earnest, as part of an escape plan, or in an effort to shut her up so he can think of one. Finally driven to show some emotion, Brennan snaps at her for wallowing in self-pity, an act that could be interpreted as tough love but which reads more like exasperation. When he grabs her hair and forcefully shoves her face into his—a moment Shane might relish (if he wasn’t such a gentleman)—we might wince and wonder if all that loneliness hasn’t gotten the better of our hero.