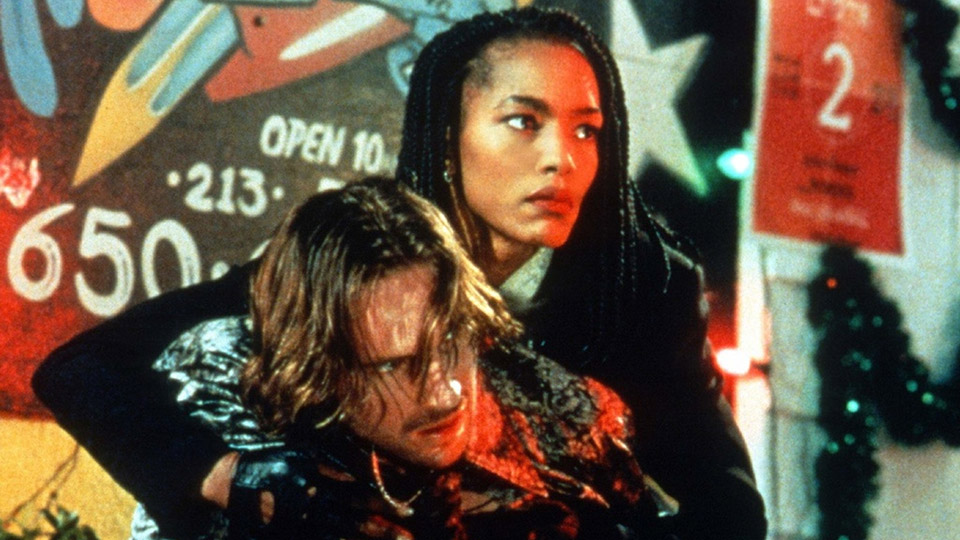 This is a long read from our new book 1995: The Year the Internet Broke, published in conjunction with our film series of the same name. The book can be purchased on our store or at Anthology Film Archives, where it shows March 7, 8 and 11.

In a strict sense, Strange Days (1995) is not a film about the internet. Rather, its plot involves the trade of bootleg physical recording media, an activity that would soon be obviated by the internet. The technological innovation it imagines instead is SQUID (Superconducting Quantum Interference Device), a wire headset by which raw human experience is captured "straight from the cerebral cortex," and through which it can be transmitted to another person. SQUID, like the internet, was originally a government technology but has since succumbed to the depravities of the market.

Ralph Fiennes plays Lenny Nero, a pornographer of this new medium. We meet him on the eve of the millennium, peddling his wares to entertainment lawyers and weathermen. If the premise seems not to invoke the techno-utopianism of the World Wide Web's early days, it does predict the relative isolation of our contemporary internet. "Wire-trippers" prefer to wade into the shallow nostalgia of "playback" than to engage with the political urgencies of "real time." Promised pure connection, users are repackaged as both consumer and product.

The film proceeds to send Lenny and his buddy Mace (Angela Bassett) through hell (Los Angeles) in order to procure the only copy of a recording depicting the police assassination of the rapper and activist Jeriko One. It is certain, we are told, to incite rioting and even revolution if broadcast. After some consternation, the disc is turned over to the LAPD Commissioner instead. And thus a film that rightly asks "How we gonna make another thousand years, for chrissake?" becomes a retrograde fantasy of police accountability. A story of the last two days of the world turns finally to the question of who to kiss at midnight.

In an interview with The Christian Science Monitor shortly after the film's release, director Kathryn Bigelow explained why Strange Days ends on this note of faith in power: "I wanted to treat 'the system' fairly, because if it's the enemy, then we're the enemy, since by not changing it we're reproducing it." Only a perverse identification with force makes this apologia possible. In treating “the system” fairly, the film fails to imagine that anything other than profound complicity might be possible. As a symptom of its time and circumstance – as a portrait of failure – it is terrific.

Like Bigelow's other work of the 1990s, Strange Days is about and for adrenaline enthusiasts. Point Break (1991) and Blue Steel (1990) before it also chased their characters' lurid highs to harrowing ruin. Formally, these movies exhibit the same peculiar pacing, with double-length second acts and quick, half-hearted denouements. All feature improbable plot twists that are nonetheless broadly apparent to the viewer well ahead of time, a sort of dramatic irony homeostasis that is oddly satisfying. Their biggest moments are hampered with overblown dialogue and tonal miscues. They are dumb, seductive, just drunk enough to dance.

Bigelow’s early films love a cop who can throw his badge away – as Keneau Reeves does at the end of Point Break – or one who lands herself on administrative leave after her first day on the force – like Jamie Lee Curtis in Blue Steel. Their heroes are singular, agonized agents whose own moral codes supersede the restrictions of the law. None waste a second on the pathos of their supporting characters, keeping them around just long enough to kill them off. All reserve a special contempt for the unfeeling, and thus ineffectual, lackeys of the state who bluster in the background. They are fascinated by that tormented passion which unites our supposed protectors and our supposed enemies, but always evince an authoritarian bent that wills the world to order.

In retrospect, it seems all but inevitable that Bigelow would find a muse in the American military. After Strange Days recouped only a small fraction of its $42 million budget, her prospects as a director were uncertain. Her first few films of the new millennium were similarly disappointments to their producers, and it wasn't until The Hurt Locker (2008) that she locked into her current groove. Looking for her preferred passions among the subjects that will reliably put asses in seats, she discovered modern warfare.

Her later work, written and co-produced by the journalist Mark Boal, attracts the right kind of negative attention, the kind reserved for based-on-a-true-stories. The Hurt Locker has been unfavorably compared to recruitment propaganda. Zero Dark Thirty (2012) stoked controversy with its inaccurate depiction of torture as having provided information that led U.S. forces to Osama bin Laden. Both movies made their budgets back several times over. Bigelow's luck broke in 2017, when not even the coveted moral opprobrium of Richard Brody in The New York Times could tempt audiences to see Detroit (2017), a dramatization of the Algiers Motel killings.

On screen, the director's frenetic vision has had to adjust somewhat to the relatively slow pace of war. Handheld camerawork compensates by adding jabs and jerks to even still, quiet moments. Bigelow's interest in the suffering human body acquires new range with the implication of actuality. Otherwise, much of the old playbook is still in use. Brooding renegades make their own rules. Camaraderie develops via endurance rituals and willful endangerment. Try-hard dialogue gets soaked in music and made more palatable. Despite her "depiction is not endorsement" boilerplate response to questions about the political dimensions of her recent work, a sense of duty runs through it. She makes sure to thank the troops, of course, in her acceptance speeches.

With time, Bigelow's war films may claim a place among the classics of the genre, for whatever that’s worth. Forgive me, then, for imagining that under different circumstances she might have continued making bizarre, schlocky thrillers, parables of American grandiosity without realism and jingoism to hide behind. Though the essence of her narratives has not changed, it was more clear – more resonant – in the absurdist register, when the guy saying "My whole life has been about this moment" was only talking about a wave.

In a recent advertisement for Rolex, Bigelow urges young filmmakers to "make a difference in this world," advising "compassion is your best friend." In STRANGE DAYS, Lenny is always attempting to use his Rolex as collateral to get out of unpleasant responsibilities. When he needs a new one, he pulls it from a stash of fakes in his briefcase.