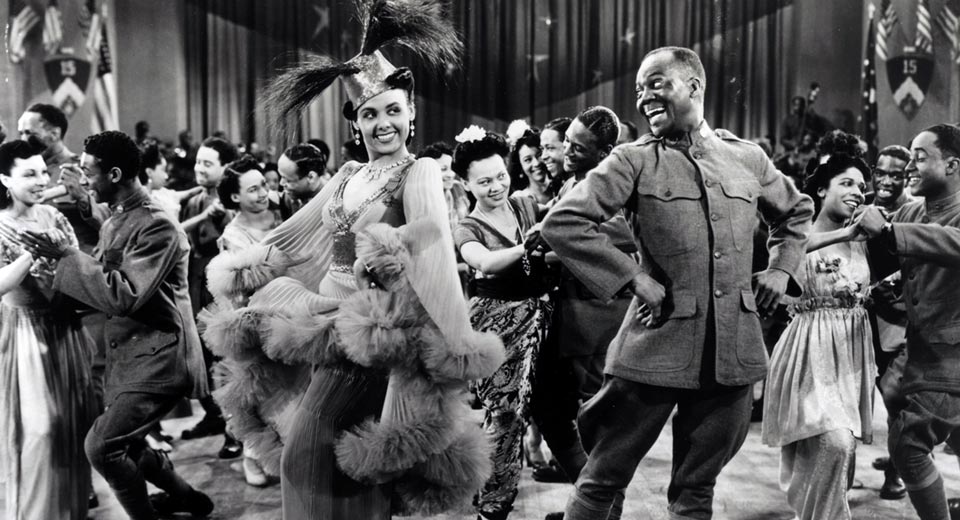 In Stormy Weather, Bill Robinson grins through a fictionalized account of his long career as a dancer on stage and screen. A flashback transports us to 1918 and 5th Avenue with the returning troops on parade. Bill and Gabe (Dooley Wilson) are with the 15th New York National Guard Regiment, strapped to either end of an oversized bass drum under the direction of Jim Europe, the famed Harlem bandleader. That night, Bill becomes acquainted with Selina (Lena Horne, in a rare leading role), and the two find each other worthy partners for the cakewalk. Upon discovering that Selina is an up-and-coming singer, Bill resolves to become ambitious himself, having never thought of it before.

The film proceeds through Harlem, down the Mississippi River to Memphis, out to Chicago, and back to New York (all by way of Hollywood soundstages, of course), with a song about Salt Lake City thrown in for good measure. En route, we are treated to performances by Ada Brown, Fats Waller, Katherine Dunham, and many others. Cab Calloway enters in the final act, singing scat and speaking jive in a glorious zoot suit. Throughout, Robinson's nervy tap steps set the pace. Horne seems to relish the sabbatical from her restrictive MGM contract. During the torch song that gives the film its title, she summons glimmering tears that fall in time with the music. After a gut-dropping display of acrobatics by the Nicholas Brothers, the film must end so we can leave the theater and catch our breath.

Stormy Weather is a revue of black American performance traditions and a document of artists working within the cultural constraints of their time. It includes examples of genre work in minstrelsy and blackface, the kind of shows in which Robinson got his start. It also cunningly sends up the limitations placed on black entertainers by the white imagination without losing its Golden Age politesse. In one scene, Bill resents having been cast as a bongo-beating ensemble tribesman and undertakes an impromptu tap solo, upstaging the director and getting himself fired. Of course, two of the film’s big numbers have already been set within this hackneyed spectacular. The cost of admission is paid to the white cultural establishment, but doubles as a transcendent critique of the same.

Later, army buddy Gabe returns in a borrowed tuxedo to break a strike of chorus girls. Audiences will have remembered Dooley Wilson from Casablanca the previous year, singing with obeisance to a brooding Ingrid Bergman. In an all-black cast, Stormy Weather's characters are deferential to no one – least of all their class superiors, played alternately for suckers or fakes. When Gabe's ruse goes south, the girls lance him on a box of chocolates. Luckily, his cousin arrives with racetrack winnings enough to pay for the finale.