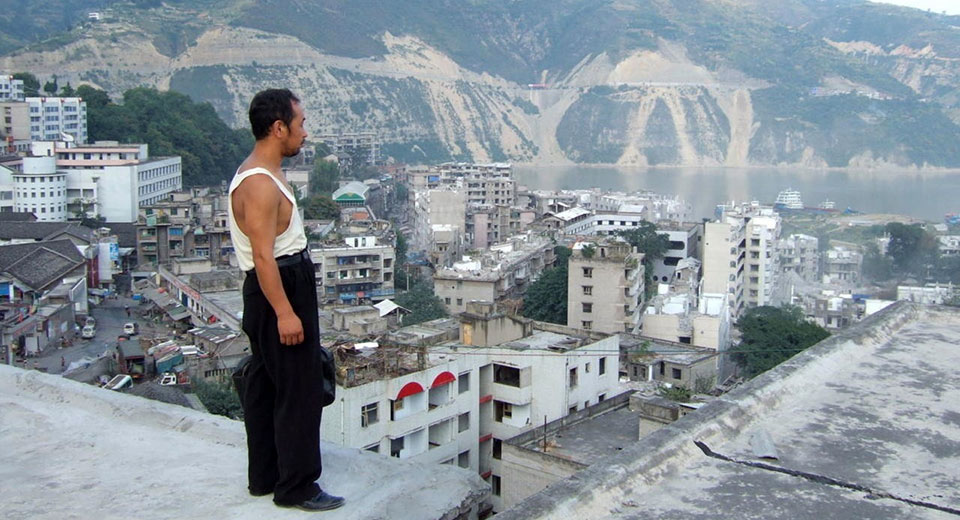 The awesome, nimble power of the Chinese state to remake the landscape is on full display in Jia Zhangke's Still Life (2006) as a man and a woman seek their estranged spouses in a town marked for demolition. In order to construct Three Gorges Dam, the world's largest power station – a process that took nearly 10 years and US$31 billion – the town of Fengjie must be sacrificed. Flooding and construction crews descend on the area while television ads eagerly anticipate renewed attention from the rest of the world thanks to the engineering marvel downriver. From a public works perspective, Fengjie's erasure is instantaneous, but for the bodies tasked with tearing it down brick by brick, the town painfully erodes.

Among the million displaced by the project is Sanming's (played by Han Sanming) wife, Missy Ma, who absconded with their daughter 16 years prior. He arrives to find his childhood home underwater and the town a maze of rubble. Missy's brother tells him to wait for her return from a job aboard a ship, so Sanming settles in and joins a demolition crew to pay his hotel bill. He befriends a would-be teenage gangster obsessed with Chow Yun-fat as the two sledgehammer whichever walls are spray-painted by government agents. In a middle chapter bookended by Sanming's story, Shen Hong (Zhao Tao) arrives in town seeking answers from her husband, who abandoned their life to exploit the business opportunities provided by the dam. Separated by class, Sanming and Shen Hong share Jia's patient resolve as the textures of the quotidian shape the stories of their grief and Fengjie's unmaking.

Jia and cinematographer Yu Lik-wai evoke Béla Tarr's Damnation as they pan across pocked concrete and mirthless couples dancing within the same long takes. Their standard-def digital camera keeps nearly everything in focus, fusing the characters to the landscape and producing haunting images of the fog-shrouded gorge that gave the dam its name. The state moves like a force of nature, but Jia foregrounds the pensive characters caught in the flood.