Stations of the Elevated 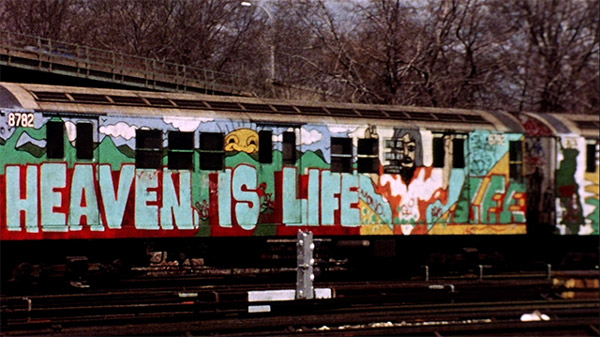 In 1977, Manfred Kirchheimer shot the graffiti covering subway trains with the delighted awe and respect of someone having just discovered a moving gallery of paintings circulating through the city’s depths, full of subversive virtuosity. His juxtaposition of this new art form (his film is the earliest document of graffiti) with outdoor advertising and architecture, including the vertical tyranny of the World Trade Center, posits graffiti art as an equal specimen in the democracy of public imagery that New York once was. Advertising here takes the form of large-scale hand-painted signs featuring bikini-clad women, hamburgers and cowboys. These are beautiful, if bland, products of great craft, but they stare down indifferently as static portraits while graffiti, untethered from commerce and freely unprofessional, flies by.

The trains say “Earth is Hell,” “Heaven is Life,” and “For the People of this City,” among other things. Boys sit and watch them, critiquing: “nobody’s king of this line yet.” A large eye looks out at the urban territories gliding by: office buildings, slums, a prison, some woods. The trains go, also, to forlorn corners, where cars are collected to be crushed, whole blocks are burned, smokestacks rise and nature reclaims. The bridges here swing or rise to admit ships full of raw materials and vast yards house sleeping train cars. After some time, one remembers that this is what most of New York City actually is. Charles Mingus’ music, which Kirchhiemer chose because he thought it sounded “organized but angry”, merges with its partners: the squeal of trains, jackhammers, sirens and children at play.

In 1976, New York City spent $20 million to sandblast all graffiti from its trains. The next year, Stations of the Elevated was filmed. The following year, Ed Koch became mayor, and introduced razor wire and guard dogs to subway yards. The last graffiti covered car was removed from service in 1989.

Kirchheimer has been making films since the 1950s, including numerous other montage-based films about the city and its buildings, bridges and construction sites, the vast majority of which are unreleased. Stations of the Elevated screens with one of these, Claw , which painfully documents the wreckage of early New York architecture in the name of urban renewal.