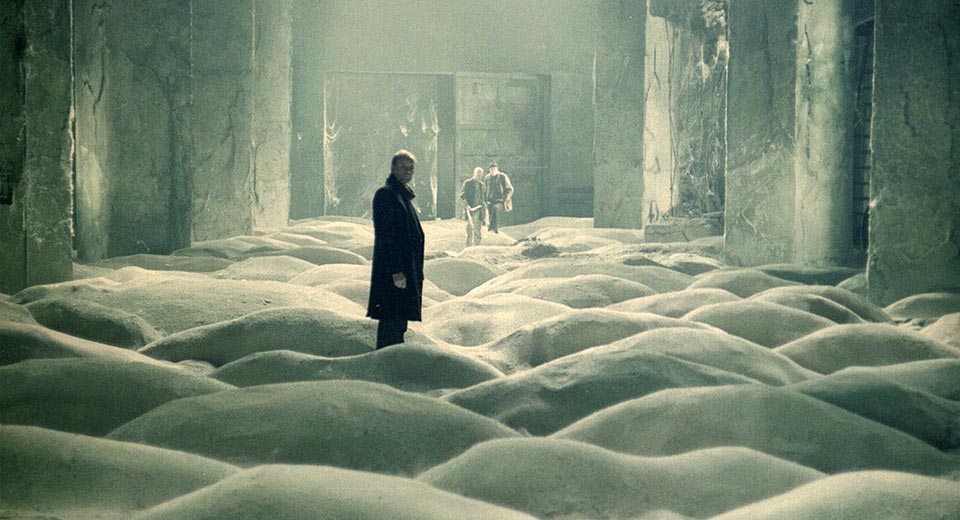 Andrei Tarkovsky's post-sci-fi fable Stalker (1979) is shrouded in myth: it is commonly regarded as the cause of Tarkovsky’s untimely death (much of it was shot near a toxic waste site in Estonia, which ultimately gave Tarkovsky, his wife, and actor Anatoly Solonitsyn cancer) and an uncanny prediction of the horrors of the Chernobyl nuclear meltdown of 1986 (the mythical wish-fulfilling Room at the center of the Zone being in Bunker Four augurs the failure of precisely reactor number four in Chernobyl, the quarantined area around which was dubbed the Zone of Exclusion). It also seems as though no two people have had quite the same viewing experience. My friend Iain saw it in France with French subtitles and didn’t understand a thing; when fellow Screen Slate contributor Jon Auman saw it, there was a problem with the projector’s sound head that produced a high-pitched tone that was sustained throughout the film’s 300-minute runtime; when I saw it a few years ago, a five-person panel interrupted it every half-hour to provide commentary on what we’d just seen, stretching it to nigh five hours; and when novelist Geoff Dyer attended a screening where a reel accidentally got skipped, he, having seen it before, was the only spectator to notice.

The film’s production was plagued by setbacks. After half the movie had been shot, the Kodak stock got ruined in processing, prompting Tarkovsky to replace his cinematographer twice and to completely rewrite the titular character from a tough smuggler into a sensitive God-seeking pilgrim (or, as Tarkovsky put it, from a “bandit” into “a believing slave and apostle of the Zone”). The Strugatsky brothers—authors of the film's source, Roadside Picnic—were not unhappy with the final script (which they were forced to rewrite nine times), but didn’t regard it as an adaptation of their novel. And to top it all off, Tarkovsky had a heart attack during the shoot.

At his best, when Tarkovsky doesn’t over-indulge in his trademark motifs, such as juxtapositions of fire and water or man-made detritus and nature (Wim Wenders has said that at some point Tarkovsky’s films started to quote themselves, creating what Dyer calls the “Tarkovskyan cliché”), he has the power to make us see the wondrous singularity of the indifferent objects that constitute our environment. Their banality is banished; the eye no longer glazes over. (The irony is that his films are universally regarded as some of the most boring ever made, or at least as belonging to the unofficial genre of Boring Movies best exemplified by him and Bela Tarr.) Tarkovsky’s intention was to transcend boredom: “If the regular length of a shot is increased, one becomes bored, but if you keep on making it longer, it piques your interest, and if you make it even longer, a new quality emerges, a special intensity of attention.” From Stalker’s idiosyncratic knitted nightwear at the beginning to his daughter’s inexplicable jar of eggshells at the end, things exude the same kind of world-enchanting thisness as Bruno Ganz’s first Styrofoam cup of coffee in Wings of Desire. Besides inanimate objects, animals are invested with unusual pathos. The dog that follows Stalker home from the Zone reminds us to regard all creatures with tenderness, like the beaten ox in Margarethe von Trotta’s Rosa Luxemburg and the titular beast in Bela Tarr’s Turin Horse.