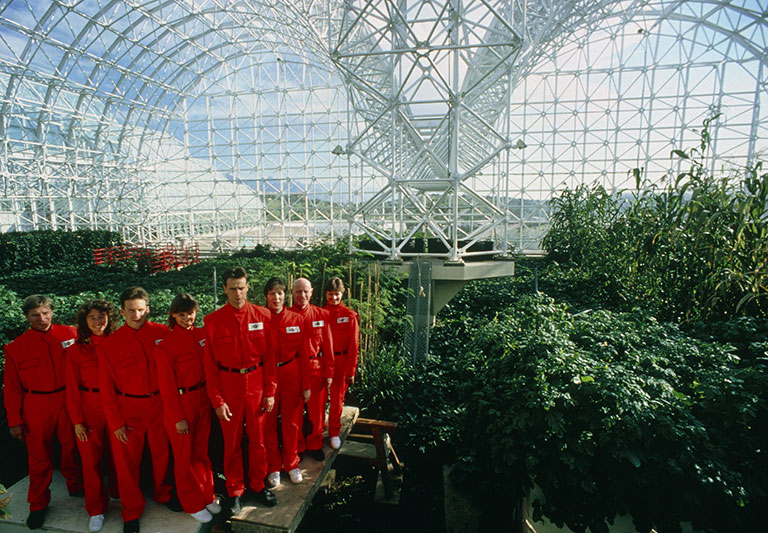 Screen Slate is thrilled to partner with NEON to bring our readers the new film Spaceship Earth, available to stream now. 50% of all proceeds from the $3.99 "virtual ticket" purchase made through our link will go toward supporting Screen Slate as we continue to pay writers, redevelop our website to accommodate streaming listings, and offer artist fees for our upcoming streaming series. This editorial was produced independently by Screen Slate without oversight by our promotional partner.

On September 26, 1991, eight researchers entered the Biosphere 2, a 3-acre geodesic glass and steel structure in Oracle, Arizona, touted as the largest closed ecological system this side of planet Earth. The intent was to house the eight inhabitants for two years, test-piloting the possibility of a self-sustaining agricultural ecosystem. If biodiversity flourished, oxygen levels maintained, and the quarters remained hospitable to life, the technology could be licensed for space colonization.

On the other side of the glass, a media circus ensued. Television news zeroed in on the most spectacular aspects of the project, exploiting the trendiness of “ecological entertainment” and the American pastime of treehugger-bashing. Some outlets questioned the credentials of the biospherians, several of whom did not have orthodox scientific educational backgrounds. Much was made of the group’s roots in hippie-ish experimental theater and the cult-like interpersonal dynamics surrounding charismatic leader John Allen, with some commentators going as far to discredit the entire endeavor as New Age ballyhoo. Ruptures in the dome’s closed circuit — a pair of duffel bags smuggled in after one of the inhabitants visited a doctor, and, later, the media’s discovery of carbon dioxide scrubbers — were played for optimum scandal. The project’s influence on Pauly Shore’s Bio-Dome (1996) goes without saying.

Matt Wolf’s Spaceship Earth charts the rise and fall of the Biosphere project, beginning with its origins in San Francisco counterculture. Well before the self-contained biome experiment began, much of the group had assembled in the New Mexico desert as part of the back-to-the-land movement of the ‘60s, founding the Synergia Ranch, variously inspired by the Whole Earth Catalog, science fiction and Beat literature, and René Daumal’s Mount Analogue. Oil heir and philanthropist Ed Bass was a frequent visitor to the commune, and his interest in ecology and R. Buckminster Fuller led to the formation of the Institute of Ecotechnics (IE), funding a panoply of scientific and cultural ventures: conferences on ecosystem management, the construction of a sea vessel called the Heraclitus, an art gallery in London, a cultural center in Fort Worth, a resort in Nepal, and the production of Shirley Clarke’s free jazz documentary Ornette: Made in America (1985).

The gradual crawl from the starry-eyed utopianism of a handful of flower children to a mass-scale ecological experiment in the public eye is pieced together through the group’s ample self-documentation, TV coverage, audiotapes of the biospherian’s therapy appointments, and present-day talking heads with the participants — many of whom continue to live communally. From one angle, it is the well-worn tale of idealism and compromise, ending in this case with a world-historical clincher that, without saying too much, pertains to a certain executive producer of Sean Penn’s The Indian Runner (1991) turned political demagogue. But the film ponders many possible cultural implications and resonances of the Biosphere 2 ordeal: the long tail of hippie modernism, the strange bedfellows of counterculture and capital, the deliberate undermining of the environmentalist movement, and, at its most birds’ eye, a persistent ontological question: is there ever such a thing as a closed system, or is the outside world always bound to rush in?