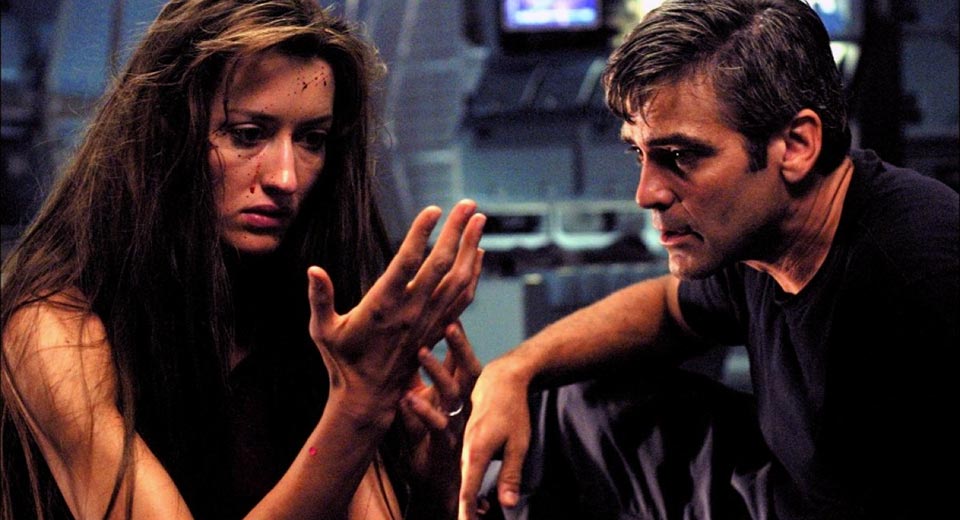 When Steven Soderbergh was writing Solaris  (2002), he described it as 2001 meets Last Tango in Paris, "a psychological drama that happens to be set in space." Like in Tarkovsky's 1972 version, the setting is basically incidental, but in Soderbergh's the "romance" element is much more prominent.

Chris Kelvin (George Clooney) is a therapist whose expertise is requested on a space station orbiting the celestial object Solaris. The crew has been suffering from "depression, hypomania, agoraphobia, insomnia, [and] Obsessive Compulsive Disorder," symptoms caused by "visitors" (apparitions of deceased loved-ones generated by Solaris). After mysterious deaths, the surviving crew members are Gordon (Viola Davis) and Snow (Jeremy Davies), a shifty-eyed caricature of a paranoiac who waxes sarcastic and listens to Insane Clown Posse (the soundtrack's only non-orchestral piece of music). When Kelvin receives a visitor of his own—his wife, a suicide—his objective detachment shatters.

Soderbergh could have said "The Thing meets Vertigo"; the crew's subjective fears turn them against each other, and the leading man tries to force a woman into his fantasy-mold. (A former crew member, Gibarian, sums it up nicely: "Our enthusiasm is a sham; we don't want other worlds, we want mirrors." Something familiar and comforting is gone and we want it back, the unknown be damned.) Or how about "Alien meets Blade Runner"? Things get blasted out of airlocks and the protagonist might not be a real human being.

Soderbergh's near future involves vinyl-clad commuters gazing into tablets, silent minimalist interior design, and holographic computer interfaces (some hits, some misses). And if you're looking for new ways to commit suicide, how about liquid oxygen or a Higgs boson accelerator?

The $1,000,000 question: Does logic correspond to the way the world really functions, or is it just a very persuasive form of morality? As Prince of Darkness's Professor Birack says, "we've sought to impose order on the universe, but we've discovered something very surprising. While order does exist..., it is not at all what we had in mind." Maybe order isn't something we find, but something we create. Gibarian again: "There are no answers, only choices."