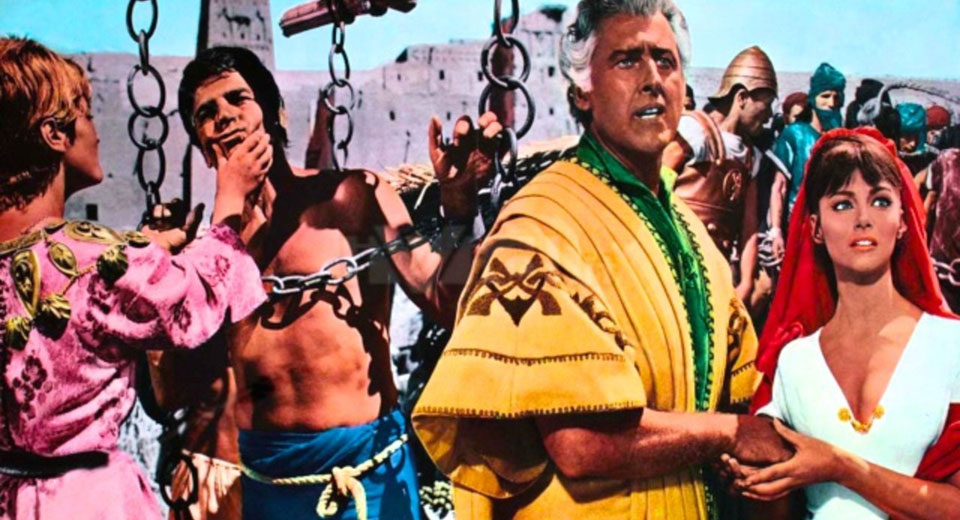 Deep within the sandy crevices of the “how did this get made?” canon is this 1962 curio, a menage-a-trois French, Italian, and American collaboration between Pathé, Titanus, and 20th Century Fox, respectively. Robert Aldrich, replacing Mr. Belvedere franchise director Henry Koster, does his darndest to wrangle a prestige picture from a messy script overflowing with sun-baked slaves, harem girls, and lengthy entreaties to an absent God. The resulting depravity—brought to bejewelled life by legendary production designer Ken Adam—is giddy salt in the open stigmata of Bible pictures.

Sodom and Gomorrah was, from its inception, doomed to turgid excess and box office failure. Stars corralled from two continents converged in Marrakesh, and what began as a $2 million production ended its lengthy shooting schedule nearly $3 million in the hole. The instantly recognizable story, injected with much oomph by countless scenes of belly dancers and oiled centurions, failed to appease both the faithful and heathens alike. The film itself straddles the conflicting duties of a religious picture: it doesn’t bother to galvanize or condemn the legends in its script. Rather, Aldrich’s film is content purely to entice: to pay brief lip service to the moral at the heart of this tale, before speedily getting to the good stuff.

By 1962 the vogue for religious epics had begun to wane, as an increasingly disenchanted, rapidly fading audience for sword-and-sandal pictures shifted toward television for its sensational and profane hero stories. Why seek out a taste of the lash and third act redemption in a bloated three-hour movie, when vivid accounts of real-life death and dismemberment could be gotten for a song from cop shows or the evening crime blotter? Credit is due to the filmmakers, excessive though they may be, for doing the vigorous work of yanking a sensational pearl from an otherwise tight oyster. Years before a slackening of sexual mores opened the door for more “libertine” Biblical adaptations, this clumsy but enjoyable epic provided a fitting swan song for a once-popular genre that celebrated vice and virtue in equal measure.