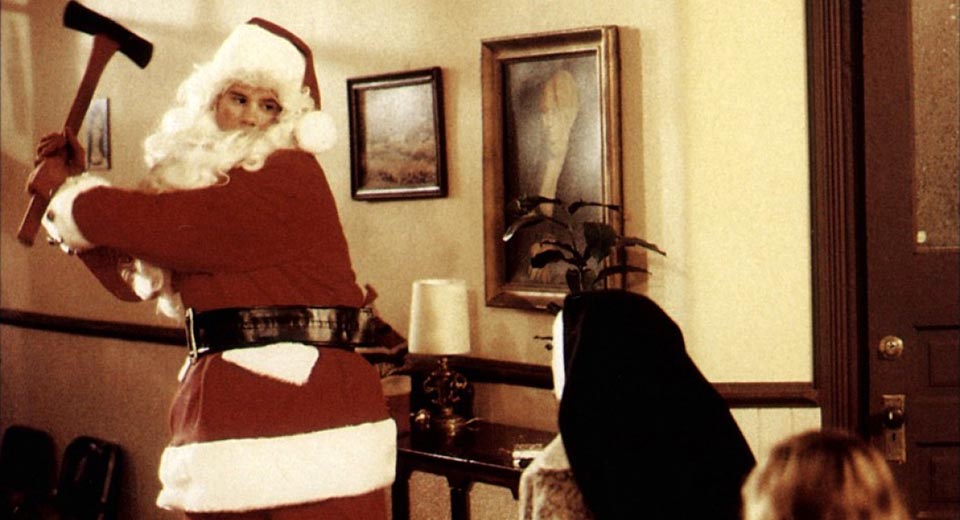 There are some films that simply don't live up to their premise—Charles E. Sellier, Jr's 1984 killer Santa movie Silent Night, Deadly Night is not one of those. The controversial slasher, which was famously derided by Siskel and Ebert and protested by parents, screens tonight at Alamo Drafthouse in Brooklyn, and 34 years after its release, it's still a nasty bit of business. In Silent Night, Deadly Night, the human brain is presented as a mass of puddy just waiting to have traumas impressed upon it. In the case of Billy (Robert Brian Wilson), the film's central character, that trauma takes the form of seeing his family murdered by a killer in a Santa costume. After growing up in a Catholic children's home, Billy, now a strapping hunk, attempts to reenter society, securing a job at a local toy store. As Christmas approaches, Billy's unease grows, and finally culminates in the worst turn of events imaginable. When the regular toy store Santa calls in sick, Billy is forced to don the costume and play Saint Nick. This is more than Billy's fragile psyche can take, and there's only one way for him to cope, and that's by dressing as Santa himself and "punishing" the "naughty", i.e. killing his victims in a variety of gory, yuletide themed ways.

Sellier's film is maybe most alarming because of its strictly causal view of the human mind.The underlying irony of it all is what parents most feared from Silent Night, kids traumatized by seeing a killer santa, is dramatized in ridiculous fashion in Sellier's film. There's not enough winking in the film to know if this reflexivity was intentional, but most signs point to "no". The psychological portrait of a serial killer aside, Silent Night, Deadly Night is a Christmas movie. The soundtrack is filled with original holiday tunes like "Christmas Fever" and "The Warm Side of the Door", and there's a cast of fun characters—granted most of them die—that would be at home in most holiday movie fare. In the end, the film tries its damnedest to live up to its thesis statement: "Christmas eve is the scariest damn night of the year!"