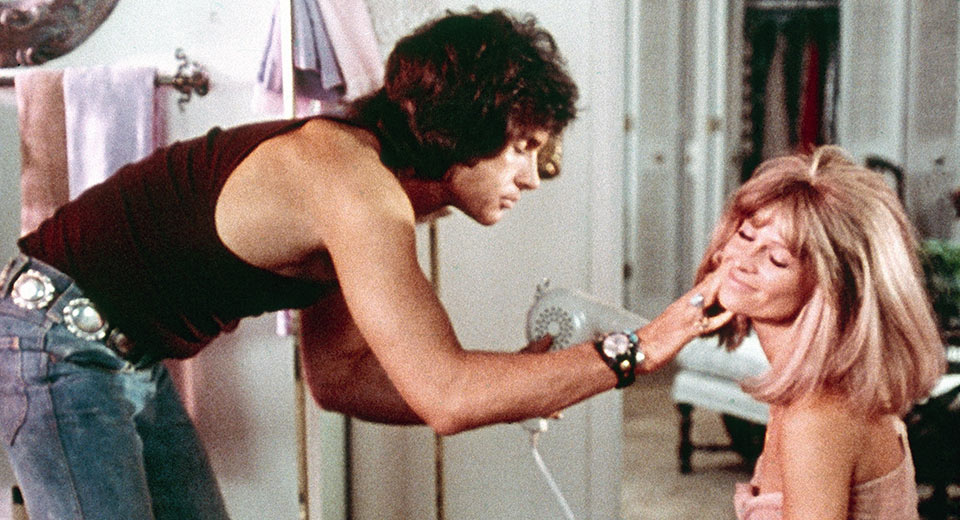 The familiar sounds of creaking bedsprings, heavy breathing, and moans of feminine pleasure: sex abounds in Hal Ashby’s 1975 satire Shampoo, but it’s all a bit of dazzle camouflage. What initially begins as an airhead womanizer’s fall from “the epitome of [his] life” is, in fact, a wry finger-wag at the Age of Aquarius. Blink and you’ll miss the telltale supertitle: “Election Eve, November 1968.”

Tricky Dick may be inching toward the White House, but star hairdresser George Roundy (Warren Beatty) has only one thing on his mind (well, maybe two): a salon of his own and, by extension, some credit in the straight world. Languishing under the thumb of a “nickel-and-dime” boss and unable to secure a business loan, he retreats into a familiar realm: an ad hoc harem, courtesy of the salon’s clientele. George’s care work -- and if shtupping Beverly Hills housewives and layering bangs isn’t care work, I don’t know what is -- provides him with a sort of “service entrance” into the ranks of California’s nouveau riche.

In the public arena of Norman’s Salon, his skills as a coiffeur belies his true value; that of a de facto therapist for a certain kind of recently liberated woman: rich, idle, and deeply insecure. Beatty performs this role with nervous reticence, his dialogue composed mostly of one-or-two word responses or disjointed entreaties. While George’s needs are wasted on the backburner, his entire identity is beholden to the whims of these women - and his personal success quickly becomes dependent on two in particular.

At the urging of Felicia (Lee Grant), his favorite client (for now), George takes his business proposition to her cuckold husband Lester, (Jack Warden). A vulgar businessman (is there any other kind?), Lester greets George with a proposition of his own: escort his mistress Jackie (Julie Christie) to a black-tie Election Night party, and the deal is on. Lester wrongly assumes that George is “a fairy,” but how could he know that Jackie and George are, in fact, former lovers? This classic beard trick grants them a perfect opportunity to pick through the detritus of their love affair, while doubling as a welcome distraction from the political U-turn unfolding on televisions across America.

Robert Towne’s screenplay subtly uses the election as a classic bit of dramatic irony - watching a movie released within a year of the Watergate scandal, audiences can take some [cold] comfort in knowing that this uniquely Californian love triangle will soon be the least of everyone’s problems. George struggles to maintain equilibrium as he is emotionally drawn-and-quartered by the film’s female leads, standing idly by while Jackie, his once-great love, messily adjusts to her “kept woman” status. As the night of November 5th fades into dawn, two winners emerge from the rubble: Richard Milhous Nixon, 37th President of these United States, and smarmy Lester -- a striking blonde on his arm, Beluga caviar on the table, and money in the bank. Things are looking great for those who have it good, and who can blame George for trying to get a little slice of that pie?