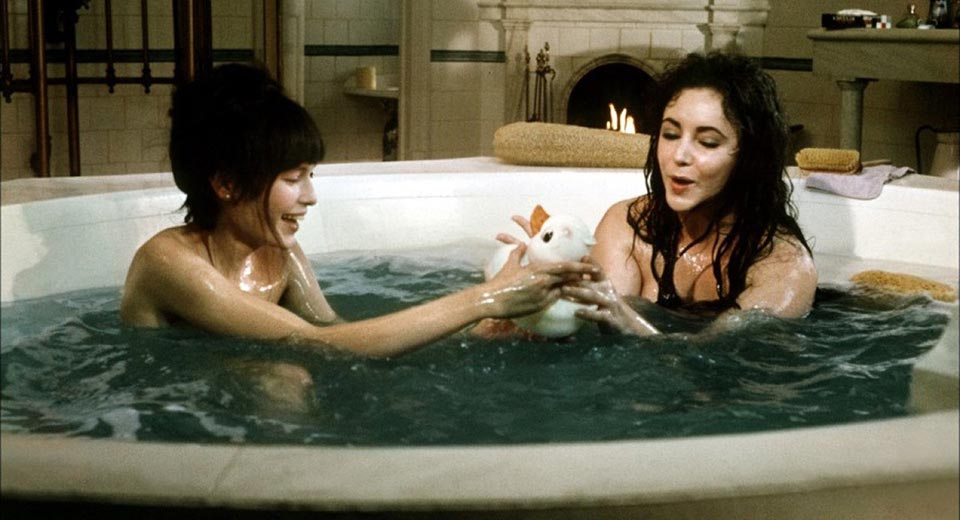 Robert Mitchum’s whistle is a siren song, spelling danger. In Joseph Losey’s Secret Ceremony (1968), its occult gravity disrupts the fantasy of two fractured women cloistered in an opulent London mansion. One, the prostitute Leonora (a blowsy Elizabeth Taylor, at the height of her camp charm), doffs her blonde wig, boots her john, and commutes to pay grim respects to her dead daughter, drowned five years previous, at a Catholic cemetery. On the bus, Cenci (Mia Farrow, again the frantic waif) fixes Leonora with a tear-streaked, beatific stare of seeming recognition, before trailing and coaxing her into the family mansion, where she lives alone.

The airless house, later filmed in Ken Russell’s Mahler (1974), is a profusive wonder of Tiffany lamps, sudden mirrors, turquoise tiles, haunting music-boxes, looming armoires, abandoned dolls, and a patriarch’s death mask. Secret Ceremony, in staging the home as the root of violation, borrows much from gothic horror but recasts the men as passed or fled—not locking doors from women’s prying eyes, but locking women within rigid traumas. Of course, in a place of such seething abundance, it’s easy to stumble upon the past; with a glance at a silver-framed photograph, Leonora apprehends her resemblance to Cenci’s late mother, who the touched twentysomething believes is alive, even as Leonora senses in Cenci some changeling glimmer of her late “strange child.”

Soon, the duo adopt their mother-daughter roles in a collusive illusion. Leonora nurtures, slaps, snarls, and guards Cenci from harm in turns; Cenci, serving Leonora a breakfast feast or sheathing her in minks, fawns over her mother-interloper but bristles when Leonora misses a beat. Losey, whose The Servant (1963) muddled the roles of lord and lackey, revels in these games. Watching, it is hard to parse moments of planned play-acting from self-delusion: Leonora’s first words to Cenci—“I’m not who you think I am, kid”—could be spoken as readily by a reluctant bio-mother as by this doppelgänger. What startles is how the pair create a credible relationship, with sparrings and slippages, reconciliations and reversals, from their kindred need. But then—enter Albert (Mitchum) as the bearded stepfather-lothario whose incestuous bent left Cenci cracked. His piercing whistle cleaves the women, and the film, in two.