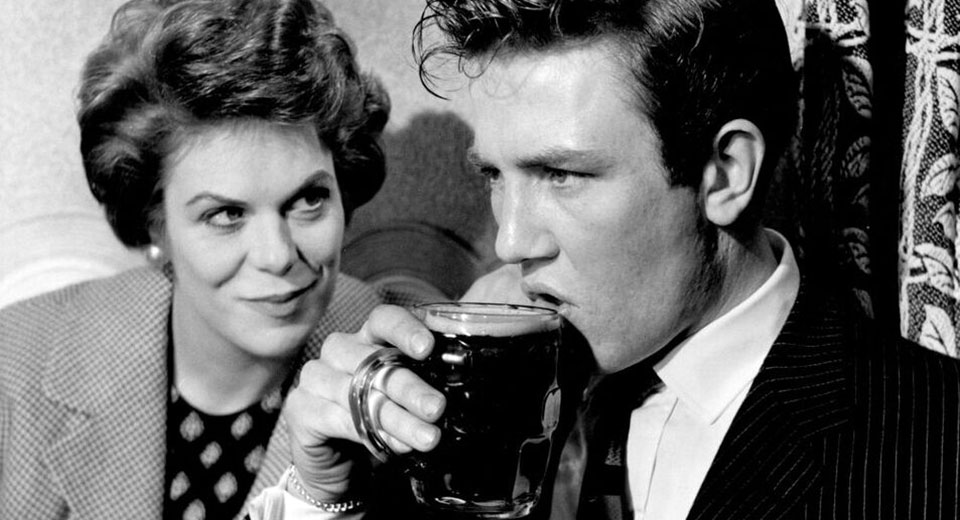 After their dynamo-documentary about sweaty jazz-chaps and the proles they entertain, Momma Don’t Allow (1959), producer Tony Richardson and director Karel Reisz next teamed up for Saturday Night and Sunday Morning (1960), in which they continued portraying the working class in its leisure time.

We start in a Raleigh factory, where Arthur (young Albert Finney ) is at a lathe churning out God-knows-what shiny parts. “Don’t let the bastards grind you down,” he growls in voiceover. He goes home to his James Joyce-lookalike dad, who’s ruining his eyes by gluing them to the telly. In between we see Nottingham, a vast sprawl of red brick. This is Arthur’s grind, and he’s sick of it. He’s another Angry Young Man, and his attitude to life is simple: “What I’m after is a good time—all the rest is propaganda.”

Alan Sillitoe (also known for The Loneliness of the Long Distance Runner ) wrote the source novel based on his own experiences. According to memoirist and classicist Robert Graves, Sillitoe had been writing nondescript fantasy novels in the fifties until Graves told him, “Alan, nobody wants that sort of stuff. Write about the life you know in Nottingham.” That doesn’t mean there aren’t elements of fantasy in it, just not of the Tolkien type. Arthur’s version of eudaimonia is more prosaic than that: “plenty of work and plenty of booze and a piece of skirt every month until I’m ninety.” No epic quests or mystical experiences in his sights, just the regular satisfaction of carnal urges.

Like many of his counterparts in New Wave fiction and film, Arthur has an opportunistic relationship to his political affiliations. He’s not committed to provincial conservatism, but neither does he have any socialist convictions. When his foreman rides his ass at lunch break, he confides to his mate that he’d gladly vote Communist “if it would get rid of blokes like that.” We get an idea of how much is sucks to be trapped in the ear-splitting noise of a bicycle factory all day, but the title is Saturday Night and Sunday Morning , not Wednesday Night and Thursday Morning , so don’t expect an adaptation of the chapter on the working day in Capital , Vol. I. (For a more sustained depiction of the experience of factory work, turn to Elio Petri’s The Working Class Goes to Heaven from 1971.) Sillitoe had far less interest in showing workers slaving for their “earthly bread”—that terrain’s been covered—than in portraying their spiritual impoverishment. Even so, Arthur doesn’t stand in for “workers” in any general sense. In Sillitoe’s words, he’s “an individual and not a class symbol.”

The Saturday nights promised by the title involve brawny, scowling blokes smoking fags and treating women to shandies, calling them ‘ducks’ when favorably inclined to them and ‘cows’ when not. For an immersive experience tonight, you’ll have to smuggle in your own pints, which are not available at Film Forum ’s otherwise well-stocked Fellini Coffee Bar.