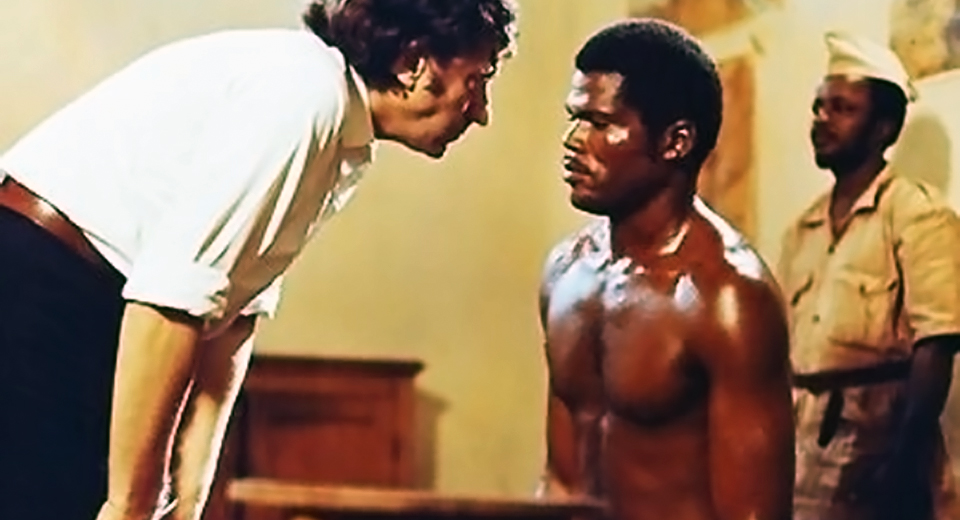 Today BAMcinématek runs a 16mm print of Sarah Maldoror's essential Sambizanga (1972), a landmark of militant Third World liberation cinema, and likely the first feature film directed by a woman in Sub-Saharan Africa. It's based on a novel by Portuguese-Angolan author and activist Luandino Vieira, who finished his book mere days before his incarceration. Vieira had been wanted in the wake of assaults on prisons and police stations by the Popular Movement for the Liberation of Angola (MPLA) in the capital city Luanda in February 1961. At this moment, centuries of occupation erupted into a guerilla war for independence – and set in the weeks precipitating these events, Sambizanga is a riveting neorealist dramatization of the struggle. It's pitched against the personal story of a woman who, with her child in tow, searches high and low for her husband, who has been arrested, beaten, and imprisoned by the Portuguese secret police as a suspected member of the MPLA. Increasingly hardened and determined, she navigates a web of colonial bureaucracy, military occupation, racism, sexism, class hierarchy, and underground resistance amid a climate of revolutionary ferment.

The film's singularly urgent veracity is inspired by Maldoror's unique background: born Sarah Ducas in Guadeloupe, Maldoror's early theater work led her to Moscow to study film with Ousmane Sembène and eventually to Angola, where she married the Angolan poet and MPLA co-founder and inaugural president Mário Coelho Pinto de Andrade. (de Andrade also created the French translation of Vieira's novel and co-authored the film script.) The film's echoes of The Battle of Algiers are not coincidental: a few years earlier, Maldoror had worked as Gillo Pontecorvo's assistant on the very same film. And yet the Italian aristocrat's affinity for revolutionary struggle, relayed after-the-fact, can hardly match Maldoror's own passionate and immediate response as an MPLA leader documenting the struggle from within, in media res. As a result, the film was shot in the Congo and was not publicly shown in Angola until the country's emancipation two years later. Indeed, Sambizanga was not necessarily aimed at audiences in Angola, but rather to gain international support for the MPLA's cause. It is furthermore unique — and doubles down on the source material, to which it is highly faithful — in its portrayal of women as doubly oppressed by sexism and colonial occupation.

Although curiously "rare" at present — there's a 16mm print at the NYPL but not much else, and if any movie has ever begged for a major rerelease, this is it — Maldoror has said, with assured dismissiveness, that the film was initially often criticized by those on the left for being "too beautiful." That's stunning. Few films are so innately, integrally and consummately revolutionary. Once seen, never forgotten: as cinema and politics, Sambizanga is unimpeachable. Don't miss it.