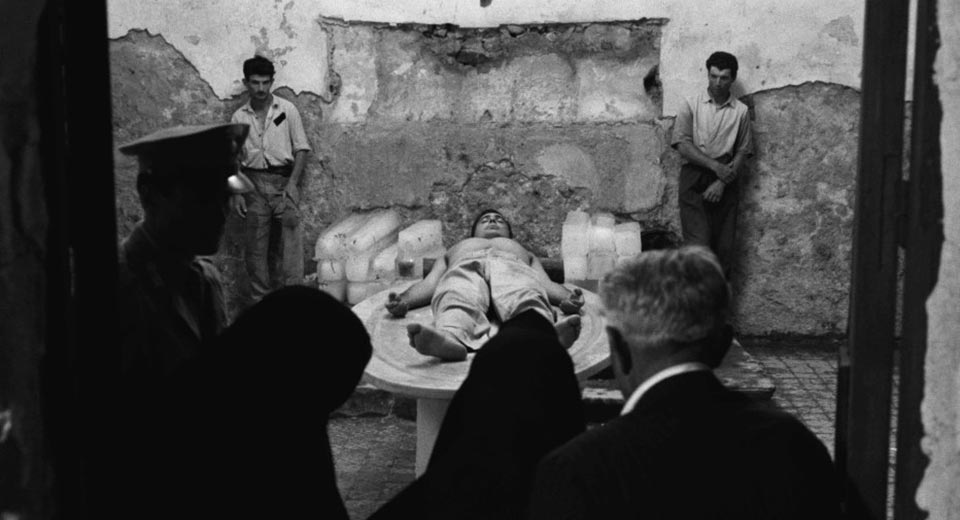 In 1992 Italian artist Maurizio Cattelan produced the work “Super Us.” The playful, conceptual work is made up of a collection of police composite sketches of the artist created from accounts given by friends and acquaintances. The work explores a perspectival place, where identity exists at the intersection of multiple subjectivities. Francesco Rosi’s 1962 film, Salvatore Giuliano, gives this thorny aspect of being another particularly Italian expression .

Ostensibly, the subject of Rosi’s film is the Sicilian bandit Salvatore Giuliano, a Robin Hood-like figure who rose to prominence after the Allied Invasion of Sicily in 1943. In the chaos following the invasion food was in short supply, with 70 percent of it coming from the black market. Giuliano worked in this illegal economy, and a run in with the authorities resulted in him shooting and killing a police officer. From here he turned to banditry, robbing from the wealthy (and earning him his designation as a “people’s bandit”). Ultimately, Giuliano was killed by his own cohorts.

Like a great philosopher or sociologist, Rosi gives form to the invisible forces that influence our lives and political destinies. The film is constructed with Giuliano just out of sight (or, most famously, as a corpse) through the accounts of others. By leaving the space at the center of the film empty, the space where Giuliano should or could be, the viewer is forced to look elsewhere. What results is a parallax shift in perspective where the complex web of forces in Sicily at the time become visible. Beyond Rosi’s usual exploration of the corrupting nature of power and systems' ability to kill though, is something else, something melancholy. Salvatore Giuliano scratches at a long lingering human itch, a secret fear—that the world goes on after we’re gone.