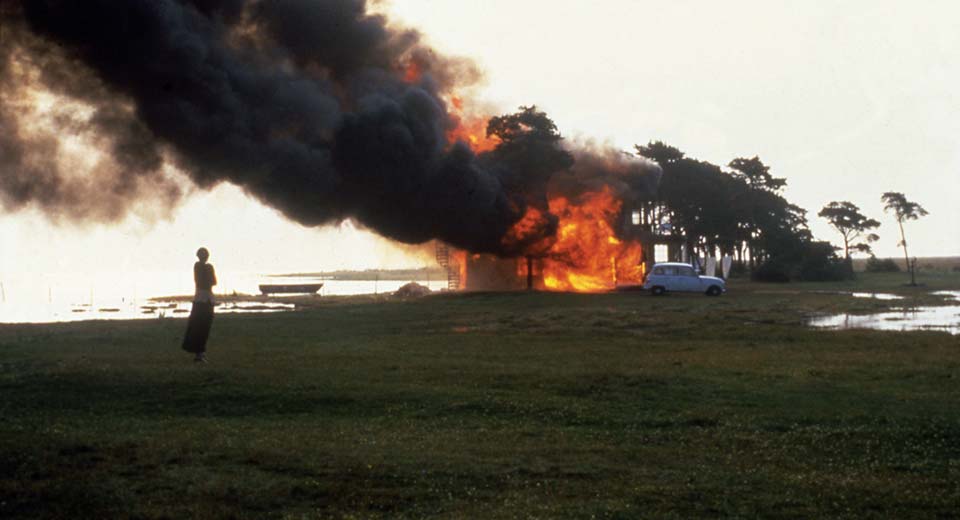 The Sacrifice begins with an extended detail of Leonardo’s unfinished Adoration of the Three Magi, specifically focusing on one of the three kings, who looks haunted and skeletal as he bends piteously to a cherubic christ. Andrei Tarkovsky’s final film, among his closest to perfection, is a traversal of agonies, exploring the savage compromises and bargaining that make up life and death.

Long-time Ingmar Bergman collaborator Erland Josephson is Alexander, a former-actor turned critic and professor who lives with his unhappy, resentful wife, stepdaughter and young son in an isolated house by the sea in Sweden. Alexander’s beloved son, who is referred to only as “Little Man”, is temporarily without speech after an unexplained throat operation. Alexander fills their silence with pained monologues about the defectiveness of civilization and the fear of death. A friendly chat with Otto, the village postman, turns serious as Otto wonders if the life he’s lived has been only a long period of waiting, and expresses torment at the concept of eternal recurrence of the self, each iteration just slightly different from the last and lived without the benefit of conscious memory. Alexander asks, “Do you know Nietzsche?” and Otto replies, “Not personally.”

The family gathers to celebrate Alexander’s birthday, along with Otto, who gives Alexander a gift of a precious 17th century map. He quiets Alexander’s protests with, “Every gift involves a sacrifice. Otherwise, what kind of gift would it be?” When the sound of fighter jets rattle the house and the television announces an impending nuclear holocaust, Tarkovsky nimbly shifts from an elegant and self-consciously theatrical set piece to his own washed-out, bluish dream-realm, full of confusion, calamity, debris and standing water. When the shift occurs, Josephson echoes Otto by saying, “My whole life has been a long wait for this.” The group awaits their demise with bouts of silence and hysterics, and Alexander eventually prays to God, promising to renounce his house, his wife and stepdaughter, and even his cherished son, to be rid of “this sickening animal fear”. Tarkovsky dedicated The Sacrifice to his son Andrei, “with hope and confidence”, having left him behind in the Soviet Union in 1982 to make Nostalgia in Italy and never to return. Andrei was not allowed to join his father until 1986, the year The Sacrifice was released and also the year Tarkovsky died.