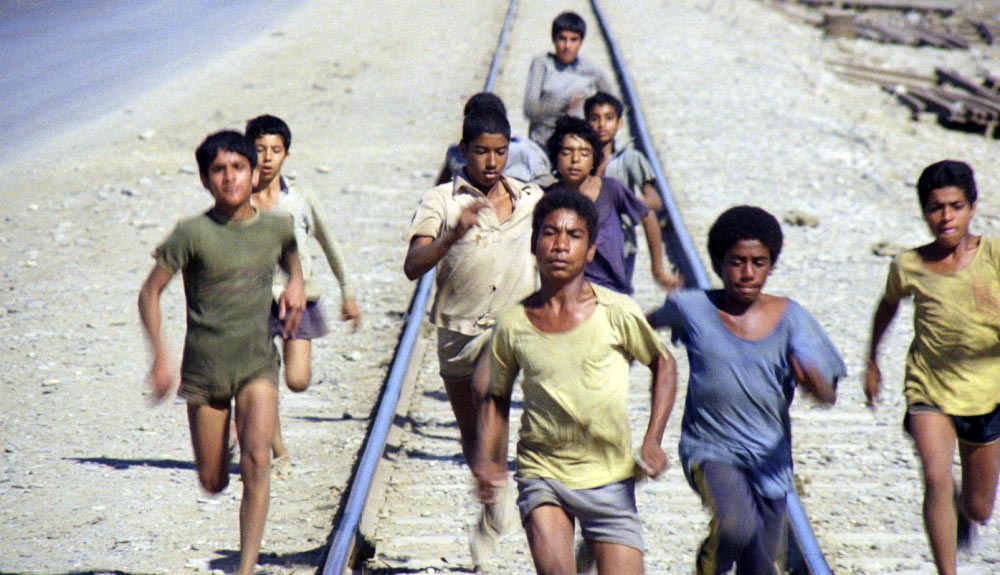 Amir Naderi’s 1985 film, The Runner, was one of the first post-Revolution masterpieces of the Iranian New Wave to garner international attention. By this time, Naderi had already made several artful and challenging films, including the grim drama Tangsir (1973), that helped establish his thematic concerns: the suffering and exploitation of the poor and the transcendent necessity of standing up to injustice. The Runner, with its extended poetic montage, sparse dialogue, and haunting, crystalline photography, offers something uniquely powerful.

The film’s plot is elementally simple: an orphan boy, Amiro (Madjid Niroumand in a blisteringly intense performance), struggles to survive. He works odd jobs (shining shoes, collecting bottles, and selling ice water) and runs races with his friends. As a boy on the street he’s vulnerable: bigger kids steal the bottles he collects, a foreigner accuses him of stealing his lighter, magazine sellers shoo him away from their stands. After each indignity Amiro solemnly soldiers on. When alone, though, he screams at the ships in the distance, begging them, “Take me with you!”

The Runner presents a deeply resonant existential tale. Naderi, who based the film on his own childhood, crafts a clever and effective motif as Amiro continually reaches out to grasp the things he sees: a ship in the distance, a plane behind a chain-link fence, a moving train. These objects are only stand-ins for what the boy really lacks: control of his own destiny.

The film’s turning point comes when a man drinks the ice water Amiro is selling without paying. The boy desperately chases him down, eventually catching him and knocking him off his bike. Amiro demands his money and the man sheepishly obliges. The boy puts the coin in his pocket, smiles his broad “aw shucks” smile and walks away. From this point on, things seem less out of reach—Amiro climbs the fence and touches the plane, and when a magazine seller tells the illiterate boy that he should be able to read, he enrolls in night classes, and the alphabet becomes the fierce mantra he shouts at crashing waves and train cars.

The Runner is a deliriously beautiful film seething with righteous anger. In its most shattering sequence, Amiro and his friends race across a rocky field, surrounded by towers of flame, toward a block of melting ice. In slow motion, they trip one another in order to get ahead. It’s a hellish vision of competition and human frailty. When Amiro reaches the ice first, he celebrates madly. As he does, though, one of the boys reaches out, exhausted and thirsty. Amiro shares his prize and he and his friends quench their thirst together in the arena of flames, showing that even in the most desperate of situations there can be compassion.

The Runner opens today, October 28, at Film Forum in a new digital restoration.