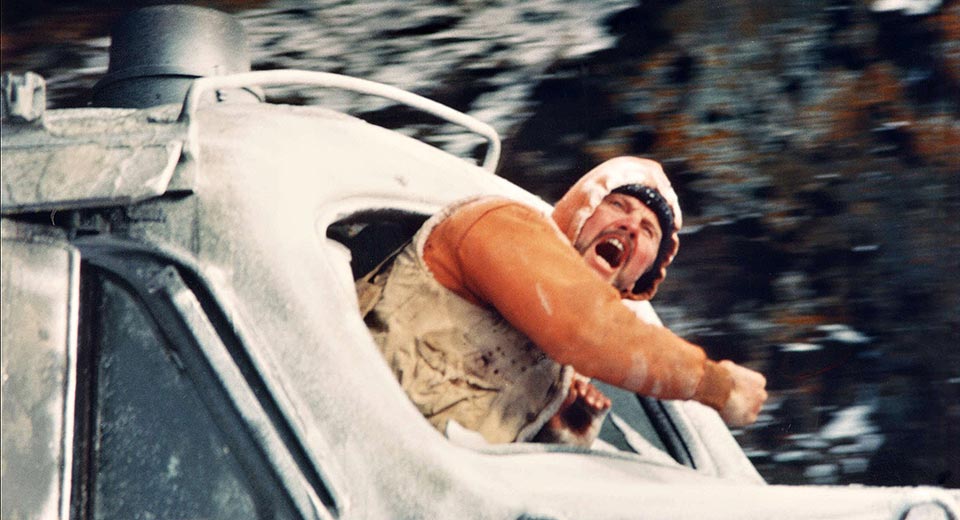 In the recent documentary Electric Boogaloo: The Wild, Untold Story of Cannon Films, there's a running argument that the prolific Reagan-era studio run by Israeli emigres Menahem Golan and Yoram Globus — producers of movies like Missing in Action 2: The Beginning, Ninja III: The Domination and Death Wish 4: The Crackdown — got no respect. Andrei Konchalovsky's Runaway Train is cited as case-in-point. Roger Ebert gave it four stars and compared it to The African Queen, Stagecoach, and The Seven Samurai, which probably says more about Roger Ebert than it does about Runaway Train. I'll give it this: it's one of the most beautiful and slickly produced pieces of reactionary junk food cinema ever made, and it's glorious.

Channeling Marlon Brando on methamphetamine, Jon Voight plays scarfaced Oscar "Manny" Manheim, a bank robber who has been literally welded shut into solitary confinement for three years and is now released into the general population due to complaints by liberal activists, the collective spectre that seems to haunt all Golan-Globus productions as an insidious arch-villain. In no time he's sprung from the Alaskan maximum security prison by fellow convict Buck McGeehy (Eric Roberts). The pair book it for a train station and hop a four-car locomotive just as its engineer and apparent sole crew member suffers a heart attack. With the film and its true, steam-powered protagonist now barreling full speed ahead, things proceed predictably, but thrillingly: the train is heading toward another train; the train is heading toward a bridge that can't support a train moving so fast; the train is heading toward yet another train which is also heading toward a sharp curve next to a nuclear power plant. Meanwhile, back in train HQ, sweaty men who can't be bothered to adjust their suspenders yell at each other about how to stop it. Eventually there are some breathtaking shots of men dangling from helicopter rope ladders over the speeding iron horse, predicating gunfire, explosions, and gory feats of self-sacrifice. And throughout, Manheim won't stop calling everyone "suckah."

Voight and Roberts were both nominated for Oscars, foreknowledge of which makes Runaway Train especially incredulous moviegoing. It bears mentioning that the script was originally developed by Akira Kurosawa, but Pride and Prejudice and Zombies is based on a novel by Jane Austen, and we shouldn't hold that against her. Disregard the attempts to classify Runaway Train as a more prestigious outlier alongside Cannon Group output like Jean-Luc Godard's King Lear and John Cassavetes's Love Streams: it's the over-the-top Cannon magic that makes Runaway Train a force to be reckoned with.