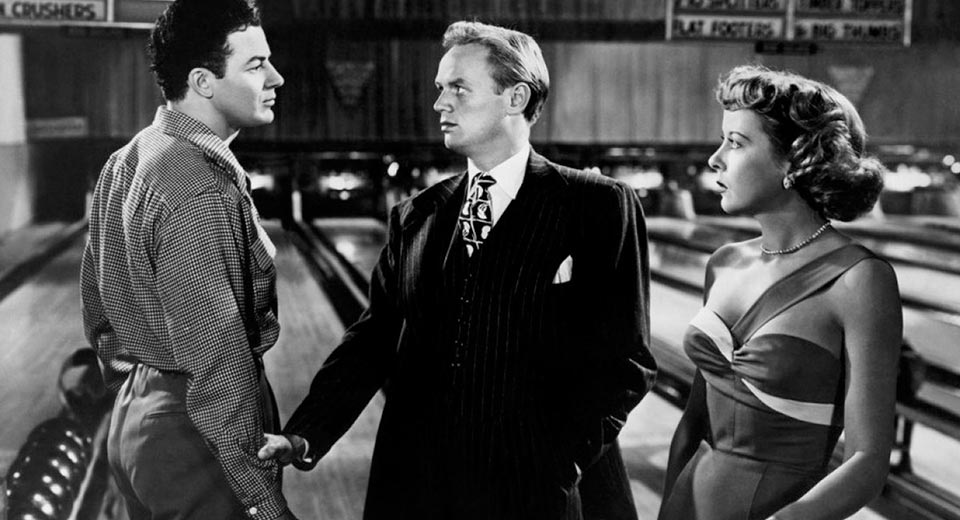 Ida Lupino's centenary celebration continues today at Film Forum with Jean Negulesco's bonkers and totally unmissable noir Road House. Although it was released one year before Lupino officially began to direct, it's still a project she had a dominant hand in authoring: she developed Road House from start to finish and sold it to 20th Century Fox, who bought it on the condition that she star in the film. Lily Stevens, a city-mouse lounge pianist rattling off monotone zingers like a '40s Daria Morgendorffer, is a character that Lupino could play in her sleep, but the story finds depth in a context of postwar alienation that informs Lupino's earliest, more complex directorial efforts.

Before we go any further, it is important to note that Lily is entering the world of a character named Jefty (short for "Jefferson T."), the shady and helplessly offbeat owner of the titular road house: a mid-century-modern combination bar and bowling alley located close-ish to the Canadian border. He is played by Richard Widmark in an unforgettable performance that makes frequent use of the third person, high-pitched cackling, and sudden temperamental outbursts that presage his inevitable descent into madness. Jefty is serially thirsty and finds Lily on a trip to Chicago, where he hires her on the spot as the road house's new resident entertainment. Pete (Cornel Wilde), his longtime friend and bookkeeper, has been used to this routine ever since they opened the place after the war—Jefty moves through in-house musicians like Reynolds Woodcock moves through models—but Lily refuses to be overpowered by these antics, for she has a job to do. After her first set (Lupino's undubbed singing is unmistakable and wonderfully smoky), she becomes an overnight sensation. As the profits roll in, Jefty becomes increasingly taken with Lily and decides to keep her on, plotting a marriage proposal in typically ill-thought-out fashion. Lily, however, finds herself drawn to the well-adjusted Pete. The trouble escalates from here.

For all of the fun of its diabolical zig-zags, Road House can be quite raw, with Lupino especially game to navigate the murky territory between independence and isolation—even if the film's treatment of these ideas can be a bit facile, culminating in an easy ending that Lupino wouldn't have settled for in her later work. Then again, Jefty isn't exactly a character cut from social realist cloth, so expectations should be tempered accordingly.