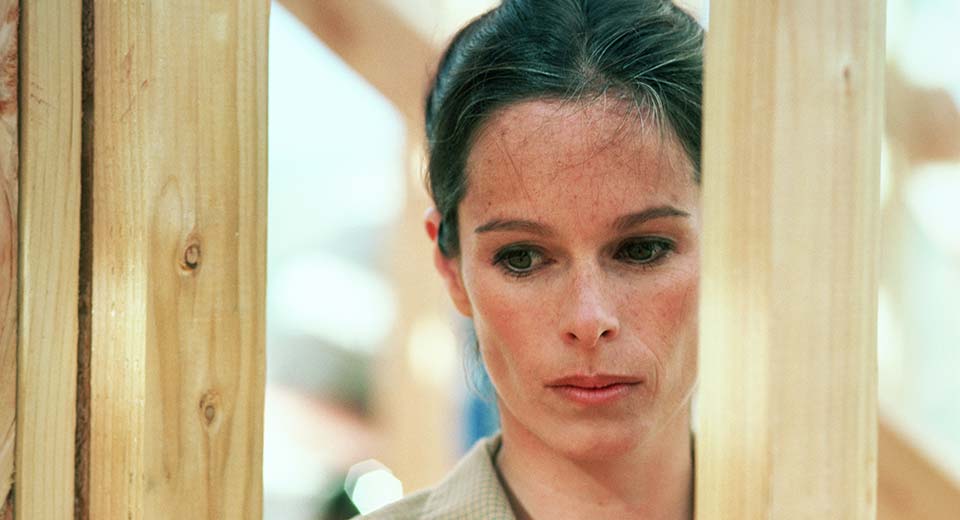 With Remember My Name, Robert Altman protégé Alan Rudolph endeavored “an update on the themes of the classic woman’s melodramas of the Bette Davis, Barbara Stanwyck, Joan Crawford era.” His resulting 1978 film twists melodrama inside-out so the keenest sentiments remain roiling under a benumbed surface. Characters pace endlessly around covert emotions but shrink from unmediated contact or heartfelt disclosure. Conversation is rehearsed, interrupted, misunderstood, laden with excuses, or—in one shot that rises above a car enclosing an unhappy couple to observe the hazy night—abandoned by a skittish camera. Only blues legend Alberta Hunter, ruling the soundscape with her volcanic wail, can access those deeper wells of feeling (in a climactic confession, her voice and a tinkling piano prevail over the dialogue as if somehow more honest, more true).

But on paper, Rudolph sketches a melodramatic narrative: Ex-con Emily (Geraldine Chaplin) pursues her ex-husband, Neil (Anthony Perkins), and his new wife (Perkins’s real-life missus Berry Berenson), re-entangling herself until she scatters their domestic anti-bliss. Geraldine Chaplin is never more memorable: She cruises into Remember My Name with a coiled ferocity. Her razor-sharp cheekbones, aristocratic nose, and the British inflections buried in her American accent lend her a scrambled sophistication (mirrored by Anthony Perkins, whose blue-collar workingman swivels his hips with svelte grace).

How can a woman become the heroine of her own life after an irrevocable twelve years in the slammer? Emily, with her Brontëian appellation, experiments as if riffing on the beats of classic melodrama: hysteria, revenge, seduction, holy isolation. She tries on personalities like clothing: first tight-lipped and feral, then (alone in her room, in a floral robe) languid and self-possessed, then barking orders or bursting into violence. Her first and last stop in town is a department store, where she buys the blank canvas of a periwinkle dress. In one scene, she perches on a stone wall within her ex-husband’s view: The dress, made slinky with a pair of red heels and a blue-silk sash around her forehead—both in their richest, most Sirkian shades—descends straight from pre-Code Hollywood. Emily is one of the walking wounded. To watch her endlessly create herself is a hypnotic pleasure.