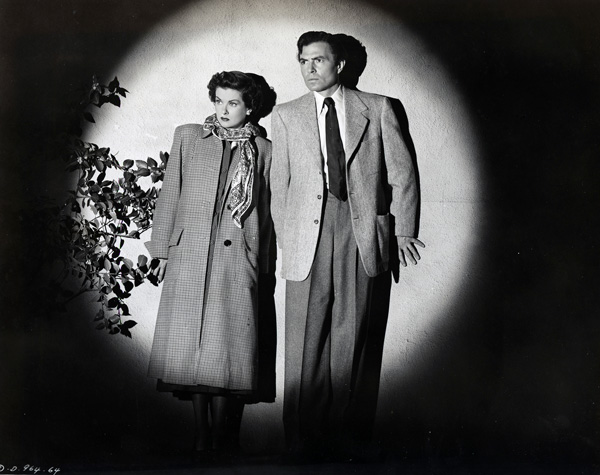 Max Ophuls’ The Reckless Moment is a noir of the LA suburbs, bringing the depression out of the urban jungle and to the exurban masses. Joan Bennett plays a middle class housewife and uber-mother figure who lives “fifty miles from Los Angeles,” with one boy, one girl, one maid, and a husband who is away building a bridge somewhere for the duration of the movie. Her precocious 17-year-old daughter Bea has gotten involved with a loutish middle-aged art dealer. When the daughter possibly accidentally kills him without realizing it on the beach in front of their house, Bennett embarks on an exhausting quest to make things right again.

James Mason appears as a cold, calculating blackmailer with an Irish brogue. He knows that Bennett wants to keep things quiet and demands money, but he melts rather quickly when he comprehends Bennett’s fierce maternal instinct to protect her child. Their relationship remains chaste, both in the service of the sanctity of Bennett’s marriage and, more importantly, the class divide between them. Bennett’s maid may have her place in a room next to the kitchen, but a thug with an accent doesn’t belong in her neighborhood. Regardless of Mason’s affections, Bennett is not off the hook, because his villainous partner still wants to get paid.

Bennett’s life as a mother is hard and seems to depress her, not because she is poor and struggling but because it is boring and confining. Still, there is no question that she must maintain the status quo. When Mason remarks admiringly: “Bea is lucky to have a mother like you,” she deadpans: “Everybody had a mother like me.” He wonders, “Don’t you ever get away from your family?” and the answer is “No.”

Mason can’t help but to try to be a good guy and to help Bennett, because he’s bearing his own maternal cross: his own mother always wanted him to be a priest and, out of five children, never realized that he was the bad one. We’re left with the image of Bennett, trapped in her living room by her loving family but consumed by grief and despair, having just learned how ugly and pointless life can be. She chokes back tears and says “Everything is fine.”