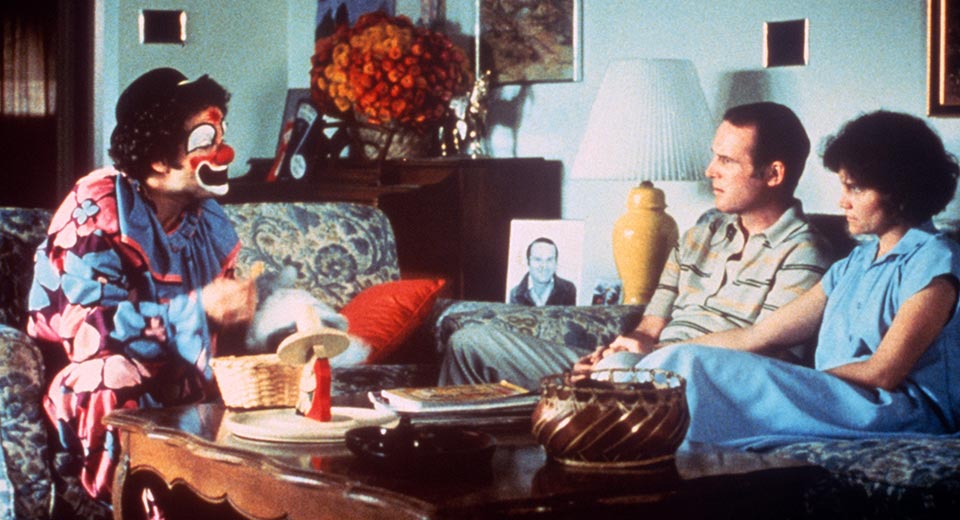 With the ever-growing prominence of reality TV in our entertainment and politics Albert Brooks's 1979 satire Real Life has taken on the dimensions of ominous prophecy. Inspired by the 1973 TV show An American Family, a major forerunner to the current reality TV craze, Real Life follows Albert Brooks playing an egotistical version of himself attempting to document a typical American family in the desperate hope of winning a nobel prize.

"Be yourselves!" Brooks repeatedly yells from the Yeager family front lawn on the first day of the shoot. His cameras, monstrous head-mounted rigs that look like astronaut helmets, encircle the family like a pack of wolves during their family dinner, awkwardly glaring at them while they bicker over spilt milk and bad table manners. Too concerned with creating a compelling film to notice the detrimental effects the documentary has on the family, Brooks spends much of these first days smiling into the camera telling his audience how great the Yeagers are. Two weeks later when the family has started to get depressed Brooks pouts loudly about not wringing enough dramatic material from their sadness and buys the family a fancy television as an apparent bribe.

While unfairly known to many as the West Coast Woody Allen, Brooks's seven films behind the camera demonstrates a strong inclination toward character-based comedy and the nuances of upper-middle class narcissism, which sets him apart from most other American screen comedians. Not content with simply filming the Yeagers, Brooks' media-obsessed "Me Generation" filmmaker in Real Life also gives the cameras a tour of his brand new house to demonstrate his own importance and upward-mobility.

Real Life is a perfect pairing with Albert Brooks' underrated final feature, Looking for Comedy in the Muslim World, a Bush-age satire on the American perception of Islamic culture which also features Brooks' playing himself as a naive filmmaker completely oblivious to his own ignorance.