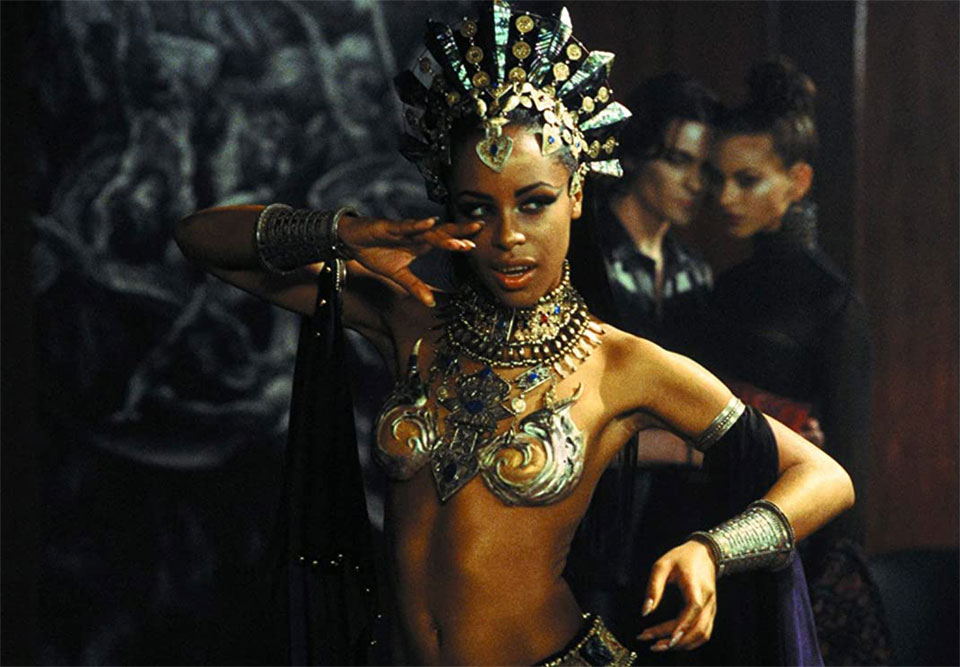 Like most Black women in horror films, Aaliyah dies in Queen of the Damned (2002). Her death can be seen as participating in what film scholar Kara Keeling describes as cinema merely mimicking our social realities, including anti-Blackness, onscreen in her book The Witch’s Flight (2007). Keeling’s thesis centers the cinematic image of the Black femme, who analogously is read as a “witch’s flight” in that her presence of difference exposes and jams the film’s formulation of racialized and sexist tropes inherent in its production, what Gilles Deleuze describes as a Cliché. A Cliché is an image that reinforces a set of given ideas of an object or subject that shapes our perception of said image. Aaliyah’s performance of Akasha as a Black femme, as evident in the “Akasha’s Carnage” sequence of Queen of the Damned acts as an insurgent force that jams and escapes the Clichés that govern the film.

Queen of the Damned is by no means a good movie. It’s an at-best loose adaptation of Anne Rice’s third novel in her Vampire Chronicles series. Rice herself was so disgusted by the film’s massacre of her work that she denounced Queen of the Damned upon its release (although she did praise the casting). The film was further haunted by production problems from its creative inception to the untimely death of Aaliyah before its release. The final product is uneven and produces an unsatisfactory ending absent of character motivation or development.

However, the narrative and formal aesthetics of the Cliché-ridden film are momentarily suspended in “Akasha’s Carnage.” This sequential disruption features Akasha, the mother of all vampires, newly awakened from her slumber by the power of the vampire Lestat’s rock music (Stuart Townsend performing music by Korn). Akasha seeks Lestat in a vampire goth club. When she enters this space she, despite these vampires being her progeny, is Othered. Akasha is visibly different not because of her elaborate costume (in which her brass breast plates actually fit right in with the nipple clamps seen on some of the clubgoers) but because of her presence as a marked woman of color. She is singled out as the “only Black woman” in the club. The antagonism of the scene is not one that immediately places Akasha as the film’s villain, but rather as Other to the largely white vampire kin relations within that space.

The tension reaches its climax on the dancefloor when Akasha begins to sway. Her dance demonstrates what film theorist Alanna Thain describes as an affective encounter that signals that “something is happening” through difference alone. She sways and glides on the dance floor that draws out a different choreographic movement not practiced in that space where nü-metal, a genre that was largely racialized as white, reigns supreme. A vampire disrupts Akasha and is met with his heart ruthlessly ripped from his chest and eaten in front of the clubgoers. From there Akasha begins to cause the vampires (now attacking her) to spontaneously combust (she is their mother after all) before exiting the flame engulfed club through the door in a scene that is dangerously close to Carrie’s dramatic gym exit from her high school prom.

“Akasha’s Carnage” imbues the film with creative difference both in representational visibility and aesthetic style, as evident with the tracking shot that introduces Akasha in the club where her presence stops the continuous shot of a vampire leaving the bar. The autonomous power of Akasha’s Carnage exceeds the narrative representation of the film. The sequence reveals what Deleuze describes as cinema being a series of images intersecting with one another creating sequences that have their own autonomy and purpose. These moments constitute an interruption within the film as they invert power regimes momentarily to break away and speak back to the power structures of the film itself. And while all of the sequences with Aaliyah are strong, “Akasha’s Carnage” briefly signals to audience what type of film Queen of the Damned could have been if it fully committed to embracing difference as embodied by the witch’s flight of the Black femme rather than Cliché.