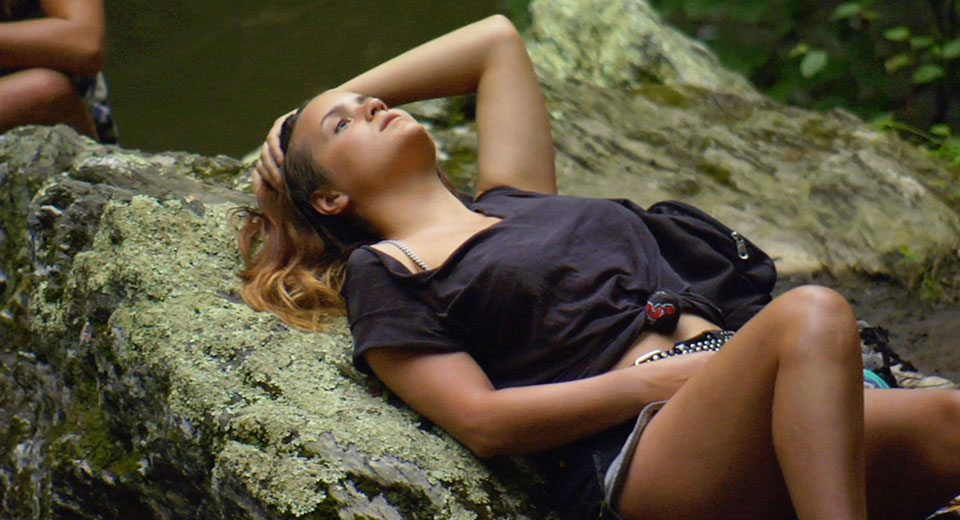 Matt Porterfield's Putty Hill  (2011) is one of the most contemporary entries in Lincoln Center's "non-actor" series, which includes films as old as October (1928) and Tabu (1931) and heavily favors the middle of the century (Roberto Rossellini, Satyajit Ray, Ousmane Sembene). Porterfield's frequently-cited inspiration Pedro Costa's Colossal Youth (2006) is one of a handful from the past decade, along with Ronald Bronstein's Frownland (2007). Both are tonally miles away from Porterfield's understated pseudo-doc.

Costa's "severe" tableaus and Bronstein's jerky handheld cinematography represent the extremes between which Porterfield composes his elegant images. His wide establishing shots and slow pans make his subject a whole milieu—a depressed suburb of Baltimore and its drifting inhabitants—rather than an individual or a set of characters. "Character" is a problematic term in Putty Hill, whose scenario is scripted in outline but has its actors essentially "playing themselves." Whereas Porterfield's master Robert Bresson called his actors "models" to emphasize their performances' superficiality, Porterfield seems to be candidly and artlessly revealing the inner lives of his subjects.

The most obvious documentary technique is the off-screen interviewer. In several scenes, friends of Cory (a fictional 24-year old whose untimely overdose and funeral serve as the pretext for their reunion) are asked about their relationship to the deceased. There's his teenage brother, his friend from prison, his sister and her friends. They like to hang out, skateboard, "tear shit up." The plainness of their responses makes the film feel like a straight-up documentary, but it actually involved an arduous casting process. They auditioned 500 to 600 people by digging through MySpace, recruiting at high schools, and flyering at malls. This makes Putty Hill an example of oodles of invisible labor going into a seemingly simple product.

Porterfield described the film as "an exercise in the perception of objective and subjective cinematic reality ... and just playing with the audience’s awareness of that relationship." Case in point: when one of the teenagers asks, "Is it bad if I don't cry?" and her friend replies, "Can you make yourself?" they might as well be actors worrying about a funeral scene.