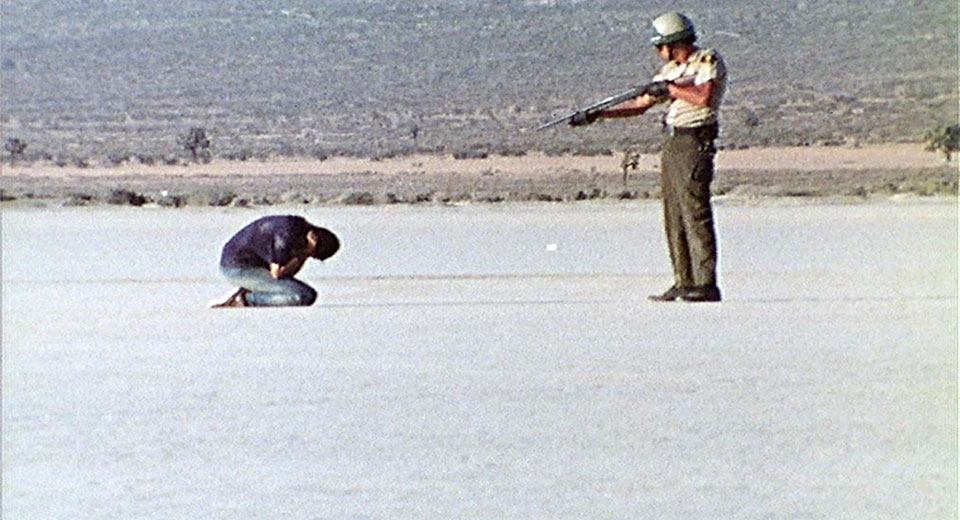 The fictional British television network behind Peter Watkins’s Punishment Park enters a post-Kent State dystopia as a “rational” and “impartial” third party. The film immediately centralizes questions of national perspective at the heart of Film at Lincoln Center’s series “Another Country,” which chronicles depictions of America by foreign filmmakers. Watkins himself left England after the BBC banned his 1965 faux-documentary The War Game, which stages a hypothetical nuclear war between NATO and the USSR, and sought other places to continue experimenting with fiction in vérité newsreel form. In Punishment Park, his sole American effort, a pantomime of unbiased legal neutrality is weaponized by the state, while the TV crew’s observation roots itself in pathos.

A voiceover explains that a McCarran Act-inspired executive order allows the government to detain, without bail or evidence, citizens likely to engage in “future acts of sabotage”; the prisoners are comprised of labor organizers, black radicals, pacifists, poets, and musicians. Watkins juxtaposes two detained groups: the first is tried by a civilian tribunal, already set on finding them guilty; the second pursues an opt-in alternative to prison time, a three-day sprint through the California desert. If they reach an American flag planted some 50 miles away, they are told that their sentences will be waived, but without food or water in 100-plus degree heat, the course resembles a death trek. “If you so choose,” the head of the tribunal carefully words it, intercut with footage of the dehydrated prisoners chased by a National Guard firing squad.

As in his prior films, Watkins cast non-actors whose political sympathies aligned with their characters. This makes the courtroom clashes especially explosive and vivid, the talking heads alternately resolute and resigned, all woven together into an emotional torrent. Within the film’s rapid montage, Joan Churchill’s camera is frank, zooming on physical restraints, on corpses, on faces, to lay out the visual evidence of the proceedings. In the ’70s, The New York Times called Punishment Park “extravagantly paranoid”; it’s a testament to the filmmaking, and to our great nation, that his vision doesn’t always feel so far afield.

Tonight, the film screens alongside Canadian filmmaker Joyce Wieland’s short Rat Life and Diet in North America, a rare 16mm treat...and much more playful: a group of rats break out of a cat-wardened prison and hightail it for the Canadian hills.