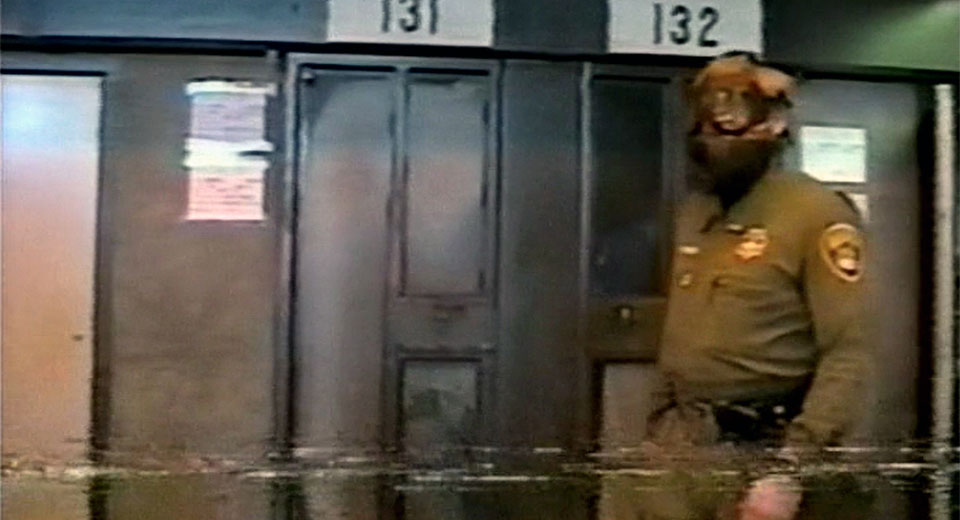 If a prison is a physical place, or mental state, of confinement, then a screen is the perfect amalgamation of both definitions: a walled-in area that you can only apprehend when you are directly in engagement with the content it displays. As seen in Harun Farocki's hour-long essay film Prison Images (playing in the series of the same name at Anthology Film Archives, which continues through July 8), the confinement that is tangible to the incarcerated subject becomes a non-narrative cinematic parable of expectations around power roles, in which the viewer is prompted to question whether the institution creates a portrait of a person, or whether the person conforms to the role they've been assigned by the institution.

Farocki culls scenes from fiction films, closed-circuit surveillance, and archives to relay a history of the systemization of incarceration. Reform (versus education) is a matter of perception on the parts of both the guards (versus protectors) and the inmates (versus captives), as each must adhere to a specific responsibility that has been tasked to them simply by identifying as their roles within the prison. The inmates must be on "good behavior" to be released; the guards must keep a strict watch to ensure that the un-liberated do not exercise their free will. Identities are either delivered as performances or accepted as assignments by those who are cast through incarceration or occupation. Either role would become false without the other’s validation, but this relationship of power can only exist within the confinement of a prison — be it physical or mental.

Farocki also begins to explore how advancements in surveillance technology have allowed for authorities to watch over non-incarcerated populations without the need of a constructed space to do it: factories act as extensions of the labor that prison requires in order to earn one's freedom; security checkpoints obtain revealing body scans that may or may not be kept on file; supermarket surveillance cameras track the shopping trends of customers in-store.

As Prison Images advises, this is where both a field of view and a field of fire come together — not unlike the role of the documentarian (guard versus judge), who manipulates footage (convicted versus relieved) to tell a story, but not one that is true, simply one that adheres to standardization and expectations.