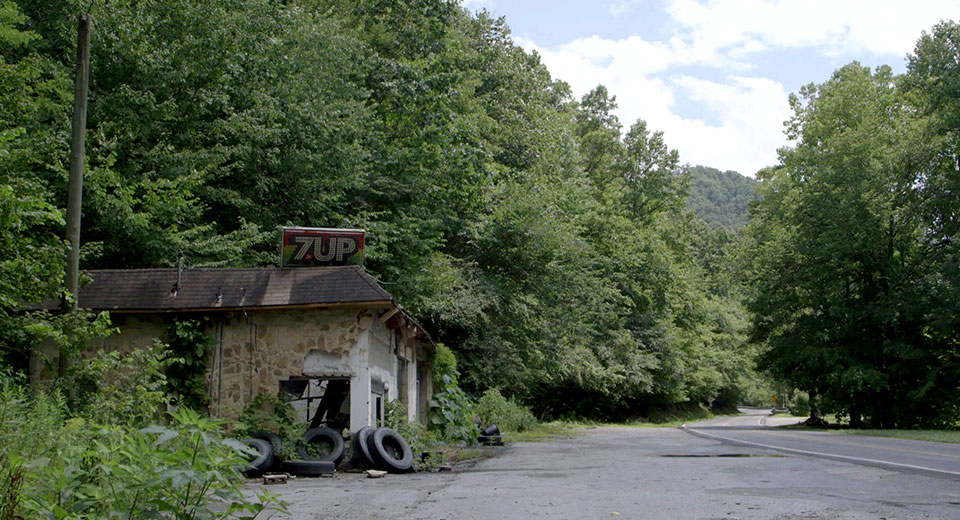 The Prison in 12 Landscapes is a documentary about prisons that features almost no direct representation of any prison. Rather, the term "landscapes" refers to sites representing the effects of incarceration, which can be areas as broadly defined as "Eastern Kentucky" or specifically as "34th and 7th," the intersection in NYC where visitors to Attica wait to be picked up by a Greyhound-style bus. Alongside images of these locations, filmmaker Brett Story uses contemporary talking head interviews, archival footage, and an audio recording of an anonymous prisoner-firefighter in Marin County, California, all to represent the environments and communities within which the prison industrial state works.

The structure of the film points to the ambivalent nature of prison-as-spectacle in the current state of carcerality in this country: first, in the use value for the state in demonstrating its "right to kill" and its structures of control, generally in the form of disciplinary narratives, whether fictional (Law & Order, The Wire) or documentary. The visual revelation of the prison's interior and its function within the disciplinary society serve as its justification. On the other hand, the prison acts also as black box: as the place to which "social misfits" are increasingly disappeared as government assistance (mental health institutions, welfare, etc.) decreases; the prison makes invisible, and often is invisible to the majority of American citizens. The Prison in 12 Landscapes's pointed lack of actual prison footage acts as a form of resistance and asks how best to circumvent the functionality and efficiency of the prison-as-spectacle in a filmed representation of the carceral state.

Punctuated by sequences of dramatic natural beauty (active wildfires, barely-moving clouds, mist-covered, purple mountains at dusk), the film is composed mostly of surprising and seemingly casual monologues by former prisoners and the residents of areas affected by prisons. It's reminiscent of the way the 7 Up series of documentaries couldn't resist the pure fascination of its own filmed subjects, seemingly leaving any social commentary aside. That is: the viewer is distracted by the information at the foreground of the film and the gestalt which the film is attempting to indicate falls away. Much that is being shown goes unseen. But it is beautiful.

Several of the film's episodes ("Detroit, MI 1967"; "Baltimore, MD") are effective in demonstrating the key role the prison industrial system plays in the constant maintenance of racial inequality and the racist institutions it preserves. In a sequence reminiscent of certain late-60s, early 70s French films, the camera slowly pans over the seemingly-banal, boring stances of people waiting in line to pay arbitrary fees for oft-uncommitted crimes, made poignant by the racial makeup of said line ("St. Louis County, MO"). The film needn't include images of bodies in prisons to represent the American body imprisoned, specifically. But this is not the focus of the film; in fact, that specificity is undercut as footage of the visitors to Attica is accompanied by the audio recording of messages to prisoners in Appalachia.

Handwringing aside, The Prison in 12 Landscapes is a unique approach to a subject which requires unceasing and varied attention, most because it is complicated, difficult, and so deeply interwoven with the very fabric of the United States—and as it is perhaps what most remarkably distinguishes this country from the rest of the world.