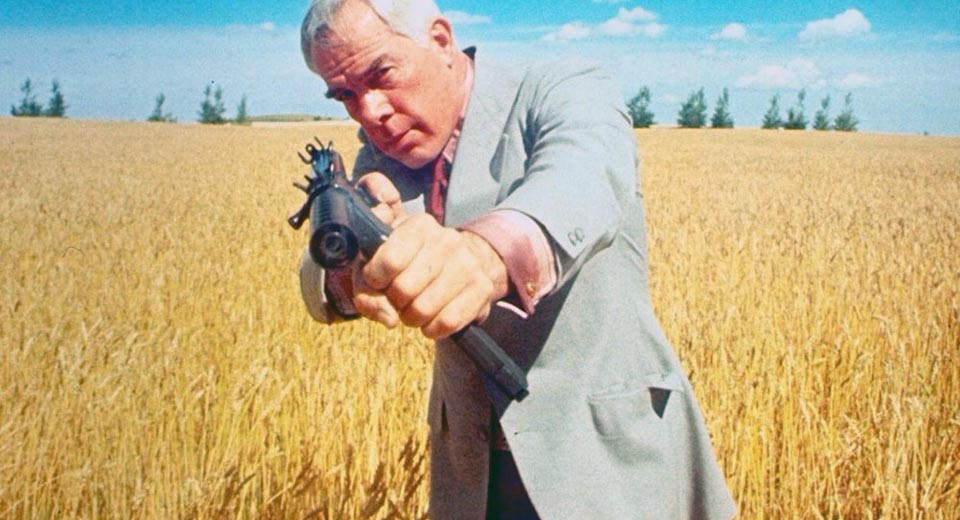 The title sequence of Michael Ritchie’s 1972 New American Cinema meets classic Hollywood gangster picture hybrid Prime Cut (which is showing at the Quad at 7pm on June 11 as part of the series The Shadow Cinema of the American 70s ) is worth the price of admission alone. The sequence traces a journey from the stockyard to the slaughterhouse, into the kill room, and through a series of gleaming industrial machines, where what was once living flesh (notice I didn’t say animal flesh) is squeezed out into pink hot dog goo and into its casing, wrapped in white paper and slapped with a shipping label: Chicago, IL—the movie’s next location. All the while the bold title text hits the screen and is promptly sliced in two with an accompanying saw sound. The sequence is stylish and the narrative, with its blink and you’ll miss it implications, is told with wordless grace to an ironically chipper musical counterpoint and then simply to the sound of humming machines. This opening introduces Prime Cut’s lean (pun intended) brand of storytelling and mix of compositionally striking and documentary-like photography as well as its main thematic concern—what separates humans from beasts.

The coolest of Hollywood tough guys, and himself a bridge between classic Hollywood and the changing American cinema of the late 60s and 70s in films like Point Blank and The Killers, Lee Marvin plays Nick, an Irish mob enforcer sent to Kansas City to collect a debt from good old boy, gangster and meat mogul Mary Ann--played, with typically humanistic detail by Gene Hackman. Mary Ann however isn’t keen to pay up. He’s also engaged in human trafficking. One of the young in his stable (literally), Poppy (played by Sissy Spacek) , catches Nick’s eye and is purchased on account (“On account of what?” remarks Mary Ann’s bookkeeper) by the tough yet tender big city gangster. The violence ramps up and the film ends in a bravura action sequence in a field of sunflowers, where big city mobsters take on shotgun toting, overall-clad henchman.

Prime Cut is filled with incredible sequences and takes total advantage of New American Cinema’s penchant for location shooting and focus on rural America as both cultural symbol and socio-economic reality. A sequence at a fair is filled with faces and activities of rural America and ends with Marvin and Spacek (who is wonderful in the film) escaping Hackman’s henchman past the firing range of a turkey shoot. The couple escapes into a wheat field, and into another incredible set piece, where they hide in the gently swaying wheat only then to be chased by a large piece of industrial farming equipment. The menacing machine collides with the Chicago gangsters sleek black, big city car, which is mutilated in a montage of unsettling machine gore. The unforgiving hardness of metal and bullets is set against the vulnerability of human flesh time and again in the film, and the brilliantly minimal script, which uses incredible economy and the barest of dialogue, draws our attention to how thin the line between brutally, dehumanized violence and compassion can be.