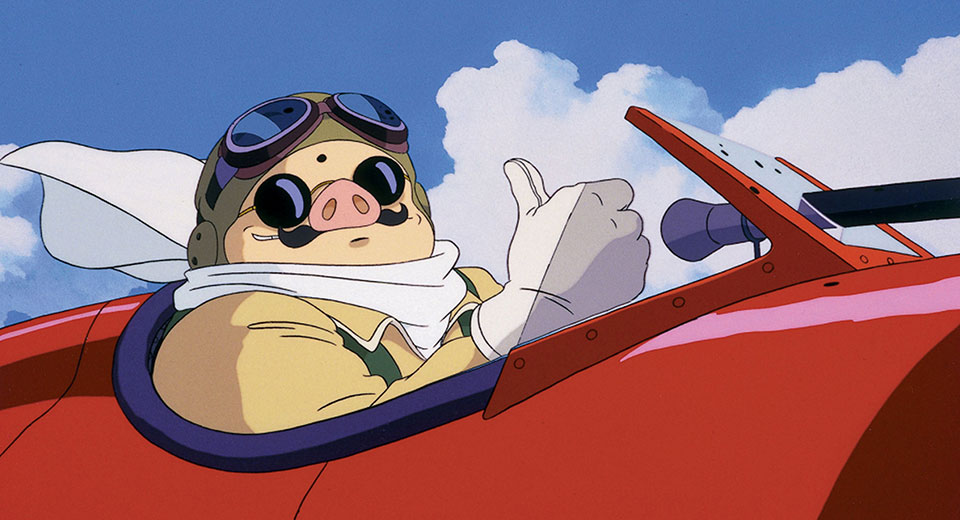 It can feel a little depressing to realize how much Studio Ghibli’s Porco Rosso — released in 1992 — may have lost its feeling of timelessness. A parable of courage seen from a post-World War sense of what it means to “do what’s right,” the film can’t help but reflect the march of a new set of forces (once again named fascist) across the world of 2017.

And yet, how fortunate we are to have an artist with the skill and stature of Hayao Miyazaki to help us navigate such an experience. Inspired by Miyazaki’s own watercolor manga, Porco tells of a WWI Italian fighting ace turned pirate hunter and his dramatic — and romantic — entanglements across the Adriatic while the haze of totalitarianism creeps in. Also, he’s a pig. Or rather, he has been transformed into one by a mysterious spell, possibly as retribution for what Rosso himself guiltily believes to be an act of war cowardice.

Miyazaki’s “Red Pig” is a meat & potatoes 20th century male hero: he’s gruff, emotionally wounded, and a lover of the more base, swine-like worldly pleasures. He claims to owe nothing to nobody, and yet he knows when the time has come to cut the shit and get to work. Conservative at heart, Porco is still open-minded enough to understand that the world is changing, and has enough conviction to realize, if reluctantly, when to change with it (see: the Utopia of an all-female team of mechanics that befalls him).

Though Porco’s journey is generally one toward progress, this filmmaker can’t help also gazing back in time. Some of the film’s deepest thrills come from the elegance Miyazaki finds in the wartime of his own past: the fashions, the architecture, and, most profoundly, the planes. A love letter to airbound mechanical engineering, the care found here in the animation of chases and dogfights is heart-inflating enough to make one believe, temporarily, that these are machines of aesthetic beauty and not violence.

The truth, of course, is that they’re both, and Porco Rosso’s very adult lesson is that these dualities tie around each other more often than they separate. This film is timeless precisely because it speaks to our own time, to the alt-right as much as to the Yugoslav Wars. Celebrating its 25th anniversary at Japan Society with a screening on 35mm (subtitled to boot), this is a special opportunity to see the film at its best. Maybe you too can take heed of those iconic words, straight from the hog’s mouth: “I’d rather be a pig than a fascist.”