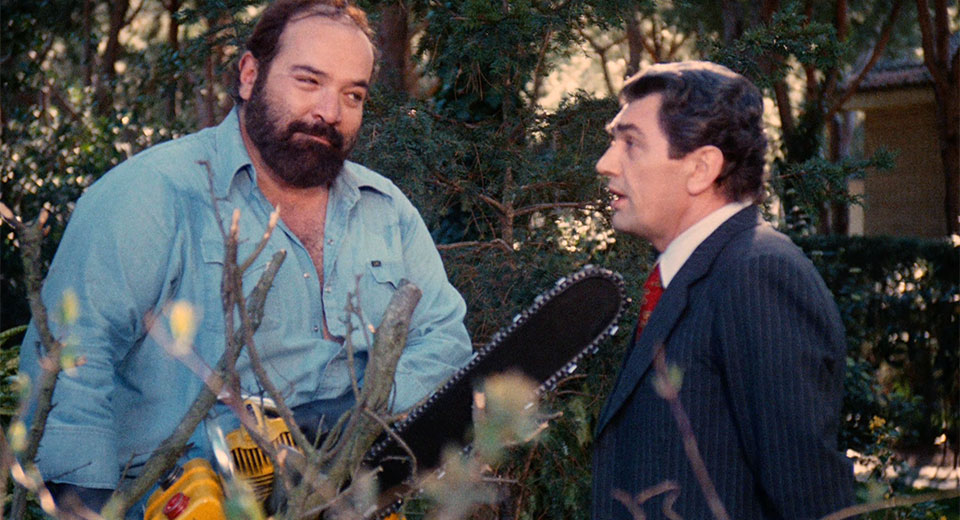 This evening author, illustrator, and woman-about-town for all things fantastic Tenebrous Kate screens Juan Piquer Simón‘s Pieces at Drafthouse. With the utmost respect, I believe it’s the absolute nadir of the sub-sub-genre of Spanish giallo pretenders, and worthy of any serious film fiend’s attention.

Though it’s yet to have a Film Forum retrospective, giallo has seen its profile grow in recent years as its films have become increasingly available on disc and streaming and allusions to its distinctive tropes have made their way into contemporary popular entertainment. The label, derived from the yellowed pages of pulp paperbacks, refers to grisly Italian whodunnit films made most prolifically in the 1960s and 70s with excessive stylistic panache, psychedelic touches, and distinctive soundtracks by composers like Ennio Morricone, Bruno Nicolai, and Goblin. The most common trademark is the unidentified killer’s black driving glove, which is usually shot in tight, anticipatory closeups delineating murder sequences.

Giallo films already have a degree of self-awareness. (For starters, consider titles like Your Vice is a Locked Room and Only I Have the Key.) So a self-reflexive near-parody made in Spain is an odd endeavor. Pieces is essentially a splendidly trashy murder-by-numbers mashup of two of the genre’s quintessential entries, Deep Red and Torso. Like the former, it begins with a prologue in which a young person commits a horrific act of violence against a guardian yet is never pegged as a murder suspect. Cut to decades later, and the adult identity of the perpetrator is unknown, yet we see the giallo gloves reassembling a bloody puzzle of a nude woman, one body part at a time. The killer is killing again, this time on a college campus in “Boston.” (Definitely not Boston.) The early sequences, in which young women’s bodies are diced by chainsaws, are almost avant-garde in their lack of continuity on the simultaneous levels of both moment-to-moment cutting and narrative-at-large. The killer lacks grace and subtlely, but there are somehow few clues. Eventually, something resembling a plot congeals when a tennis star-turned-police officer goes undercover as a tennis star-turned college professor. The body count piles up. The killer is revealed. Someone gets his balls shredded. The movie ends. Amazing.

Movies like Pieces are wonderful because of their efficiency and earnestness. It takes a genre that has sophisticated gender and body politics, a unique visual syntax, and riveting suspense, and mutilates it down to its most base constituent parts. It is brilliant, and an unqualified good time.