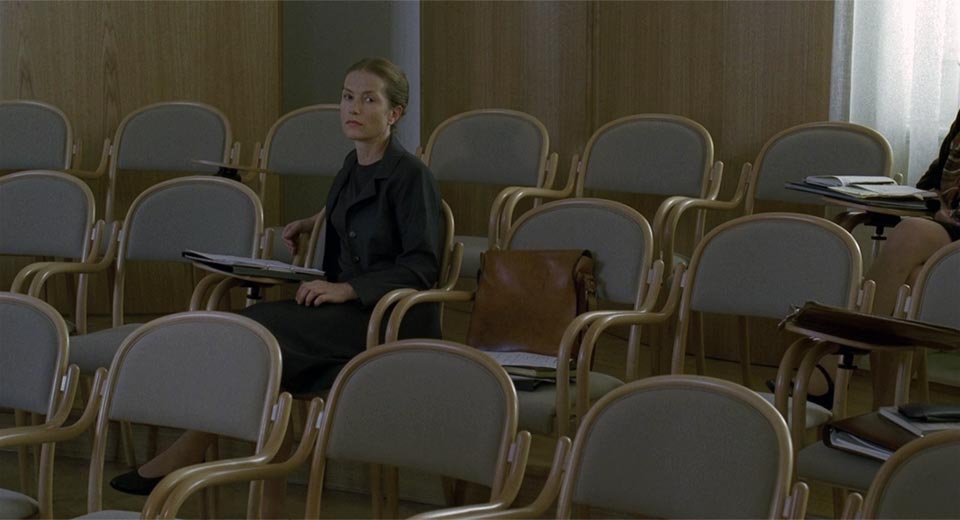 After The Piano Teacher caused a stir at Cannes in 2001 ("ferocious booing"), The Guardian's Stuart Jeffries called its source novel's author, Elfriede Jelinek, a "misanthropic polemicist" and went on to itemize the ways in which Michael Haneke's screen adaptation is more subtle. A big part of Haneke's mystique is built around his refusal to clearly signal his position on the central issues of his films, and The Piano Teacher is no different; all the obtuse violence is shown with unsettling objectivity, like watching magnified microbes destroy each other on a glass slide. But is Haneke's ambiguity a sign that he respects our judgment, or is he just playing games with us? Does he get sadistic pleasure from driving his viewers to hermeneutic desperation?

Erika Kohut (Isabelle Huppert) is a tyrannically perfectionistic piano teacher at a Vienna conservatory. She berates her terrorized students with the zeal of a medieval mystic, as if her goal were to make them feel ashamed for even trying. (Imagine being fifteen and being told that the way you play certain chords dismally fails to convey Schubert's critique of the "obstinacy of the complacent middle class.") But when Erika meets Walter Klemmer (Benoît Magimel), a talented young pianist with sexy blond bangs and a dimpled chin, her defenses begin to crack. He loves Schubert as much as she does, he's read Adorno's essay on Schumann's Fantasia in C Major, and he displays a precocious disdain for Bruckner. But Erika miscalculates Walter's maturity, and when she writes him a letter detailing the ways she likes to be bound and gagged, he kink-shames her and storms out. They spend the rest of the film negotiating this ambivalent combo of mutual fascination and revulsion, and it ends in assault and self-harm. (Imagine an alternate ending where Walter turns out to have some BDSM experience and is totally fine giving Erika what she wants. Or maybe she meets people who share her kinks and just forgets about Walter.)

Is Haneke saying something general about healthy sexual drives being twisted into sinister perversions by repression, or is he taking a cue from Thomas Bernhard and saying something specific about the stiflingly conservative atmosphere of the Viennese cultural establishment? Haneke has said that he downplayed the distinctly Austrian aspects of Jelinek's novel so that international audiences would feel more implicated, but to me The Piano Teacher feels firmly lodged in the same airless milieu of hypocrisy and cultural myopia that Bernhard was so skilled at excoriating.