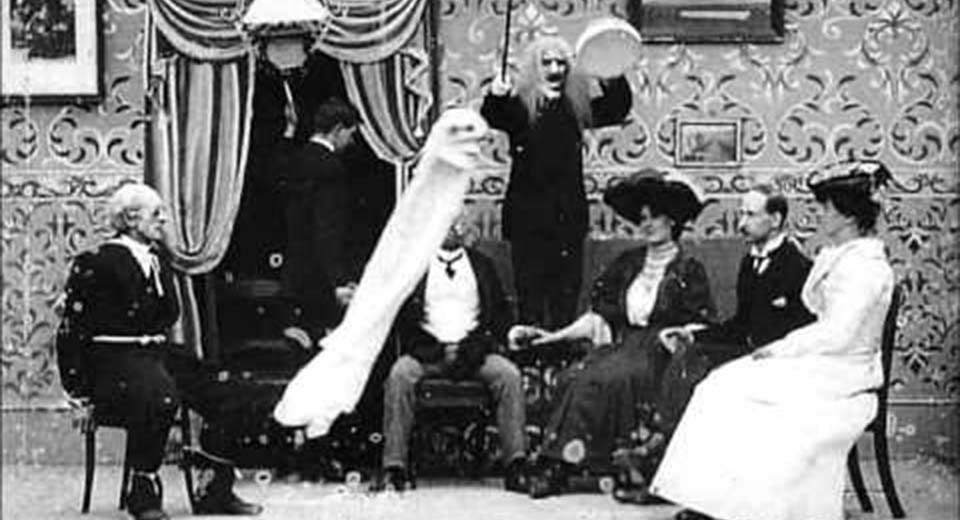 Cinema began less as an art, more as a curiosity. Its early practitioners were hucksters, charlatans, and illusionists, and its direct predecessors were phantasmagoria, magic lanterns, vaudeville, and sideshows. Consider, for instance, that the first major film exhibition space in the United States was not an arts center or a playhouse. It was a wax museum on 23rd (now a P.C. Richards and Son) equipped with its own basement “Chamber of Horrors.” It’s there Edwin S. Porter, an electrician by trade who had installed the museum’s custom projection booth, became America’s first film programmer—and subsequently a filmmaker himself. Meanwhile in Brooklyn, Vitagraph Studios, the most prolific early film studio of the aughts, was founded by conjurers J. Stuart Blackton and Albert E. Smith, pioneering stop-motion animation and fake news.

In London, the early kinetoscope films of British inventor Robert W. Paul were shown frequently at the Egyptian Hall, dubbed “England's Home of Mystery,” a hub for magicians and fraudulent spiritualists alike. It's there Paul encountered Walter R. Booth, then an assistant to John Nevil Maskelyne (stage magician, skeptic, and inventor of the pay toilet). Together from 1899 to 1906 Paul and Booth produced over twenty early trick films, featuring special effects adapted from stage magic intended to startle and amuse. Paul would also serve as a key benefactor to France’s George Méliès, providing him with the film projector for the magician Robert-Houdin’s theatre, and later the camera Méliès used to make his legendary shorts. Nearby, Spain found its own trickster filmmaker in Segundo de Chomón whose early hand-colored shorts remain some of the most anomalous of film’s early years, a probable influence on Buñuel and Anger.

So: it’s Halloween and you’re a cinephile of the purist, thrill-seeking, or miscreant variety. No point to look further than Light Industry's Photographing a Ghost , organized by Screen Slate's own Caroline Golum. It's a veritable séance of turn-of-the-century sensibility, resuscitating films by this motley crew and more, paired with improvised saxophone and readings from the spiritualist movement.