The Phantom of the Monastery 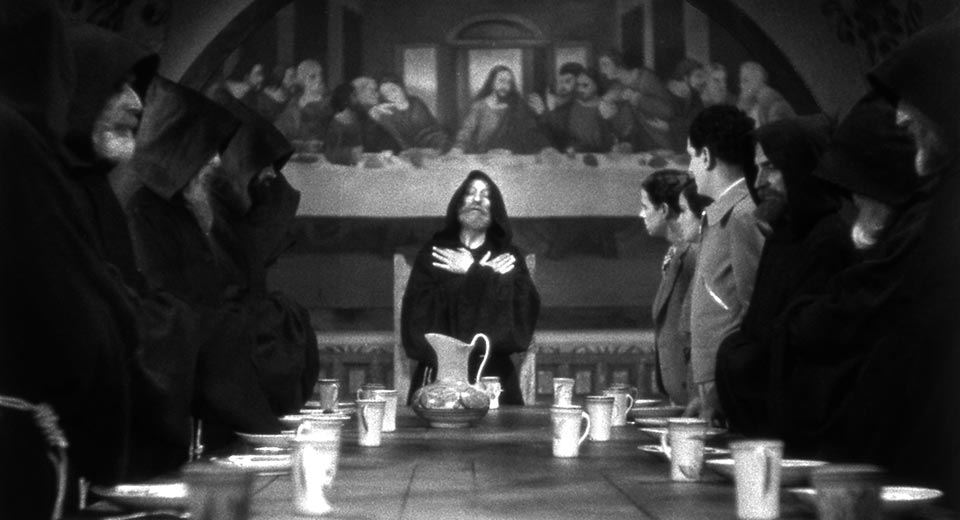 Fernando de Fuentes's unsung parable of lust's destructive power The Phantom of the Convent steps out of the shadows for MoMA's 16th To Save And Project series.

Best known for his cynical Revolution triptych, de Fuentes filmed El Fantasma amid them in 1933, while Mexico was in the throes of its own Great Depression. The country suffered more malaise as a series of puppet presidents eroded hope for a democratic future. It was an era of corruption, betrayal, distrust, and decay, and El Fantasma is very much a product of its time. Fuentes' contribution to Mexico's first homegrown horror cycle opens in media res with near-death and confusion. A triangle of best friend, husband, and wife find themselves lost after nightfall on a mountain allegorical as Dante's forest. Husband Eduardo is wary and cautious, friend Alfonso's looking for kicks, and though all later claim it's the strangeness of the space affecting her, wife Cristina's ogling Alfonso from jump — her agreement that "it could be a great night" is tacit invitation for him to take her right there.

A tall, mysterious stranger — Satan? A fellow monk? — appears and guides them to what they thought abandoned ruins. Their first glimpse of the monastery is blatant illustration; likely a solution to technological limitations of the time, it casts a pall strange as Blue Velvet's fake robin over their eerie evening. El Fantasma is prime example of To Save And Project's metier; tracked by Fuentes' roving camera, the trio's wanderings down stark, gloomy halls and stone rooms are exactly the sort of images cinephiles would, and will, delight in seeing restored.

The Order of Silence's long-suffered penance for the carnal sin of their brother mirrors warning to Alfonso not to fall into the same wanton ruin, a suggestion he flagrantly ignores. One man's venal desires causing mass suffering for untold years, another's cowardice blinding him to his own cuckolding — the film may not scream politics but its message to the Mexican people wasn't subtle.

You could call El Fantasma a cautionary tale, save no one in the trio seems to repent or suffer punishment. Keeping with Fuentes' caustic commentary they all slink away come dawn happy to have their heads out of the noose, but the uneasy images they witnessed will linger long after the sun rises.