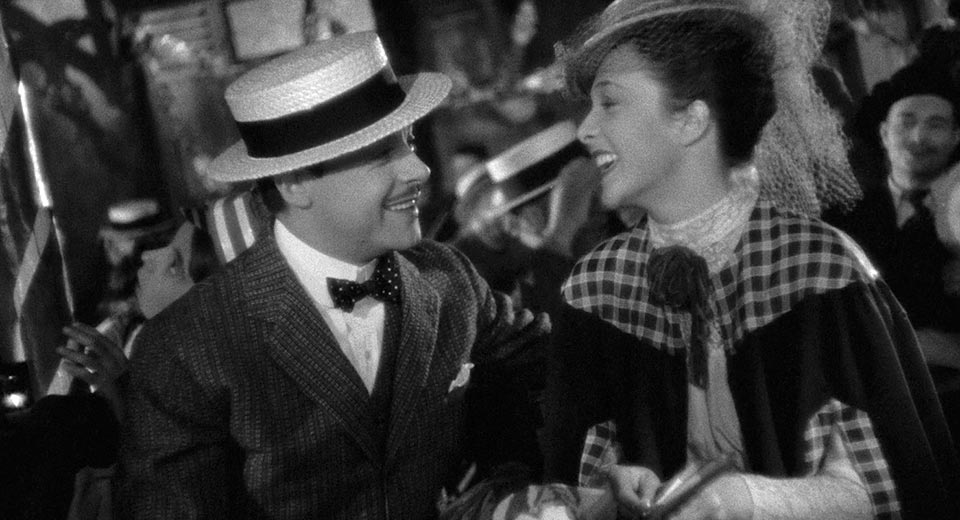 Abel Gance’s 1940 melodrama Paradise Lost (aka Four Flights of Love) feels curiously wrong, even as it showcases the luminous visual mastery of its creator. It isn’t difficult to imagine it as a silent drama of expansive gestures and well-earned tears, or as an ironic, Sirkian examination of forbidden love. In fact, such musings are the cinephile’s best defense against this handsome film’s jaw-tightening hobble toward pathos. As it stands, however, it’s an intriguing misfire full of unexplored avenues. Nonetheless, Gance’s staging, and the film’s shimmering black and white photography (courtesy of Christian Matras, who worked alongside Renoir, Ophüls and Buñuel during a remarkable career) make for essential viewing.

The clunky, almost campy plot is as follows: Affable painter Pierre Leblanc (Fernand Gravey) falls for Janine (Micheline Presle) underneath carnival fireworks and shortly thereafter stumbles into fantastic success as a fashion designer. World War I interrupts their wedded bliss, sending Pierre to the front. In the trenches he receives word that Janine has died giving birth to their daughter, Jeannette. Distraught, he volunteers for a suicide mission, claiming no desire to meet the child whose face would only recall his beloved. Yet he survives and is goaded by a former flame to claim his toddler from an orphanage. Years later, as an aging magnate of declining health, he plans to wed Laurence, a woman younger than his now-grown daughter (also played by Presle). Jeannette, too, has found love, though her partner, Laurence’s brother, Gérard, refuses to marry her if the scandalous marriage between her father and his sister proceeds. And so the aging millionaire must decide between his love for an adolescent and the future happiness of the daughter who looks exactly like his dead wife.

What might have played as a farce in the hands of Preston Sturges or a psychosexual fantasy by Buñuel, is aimed by Gance straight at the heartstrings. The tone is off-putting and sentimental enough to cause tooth decay, which is tragic considering the goldmine of sublimated desires offered by the plot. Gance provides luxurious images and a comically breakneck pace that leaves little space for contemplation, so it’s up to viewers to reconfigure the drama into the story of a narcissistic Greatest Generation romantic refusing to yield the world stage to the young, or a tale of pathological grief driving an old man to marry an absurdly young woman in order to escape the lust and guilt he feels toward his daughter/wife. The experience is wholly satisfying, just not in the way anyone intended.