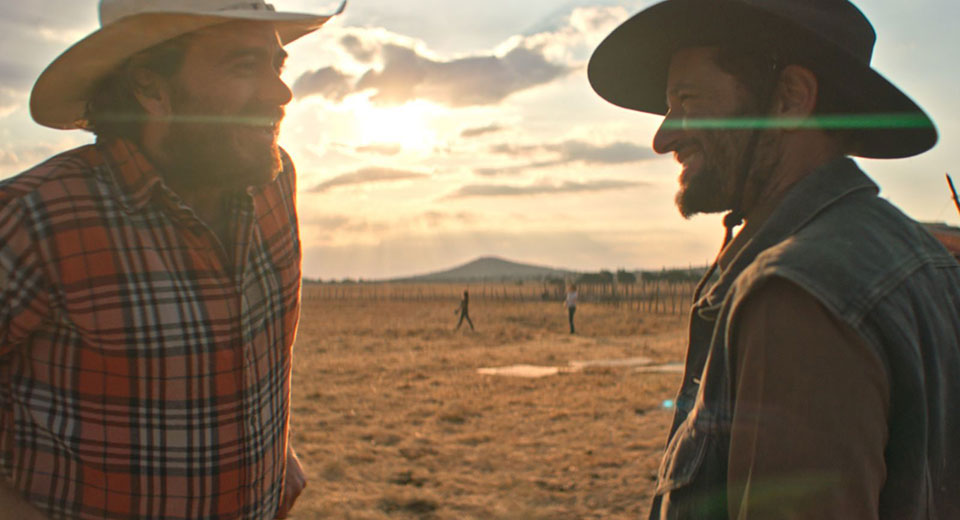 Our Time, Carlos Reygadas’s fifth feature, takes place a few hours east of Mexico City, in Tlaxcala on a sun-kissed ranch, stretching distances in the horizon, and gathered in by gently sloping mountains. The air is pregnant with heat, clouded by the dirt kicked up by the heels of bulls. Prefaced by a naturalistic composite of libidinal fun and games — a gangly pack of boys stake out an ambush on a group of sun-bathing girls, a couple of would-be teen lovers swim side-by-side through muddy grey lake waters — a blood-orange sun ultimately sets on a group of rancheros testing the strength of their new young bulls in between friendly banter and swigs of mezcal. But even the most captivating and idyllic of arrangements are capable of yielding cruelty, of turning rotten, and steering into acts as senseless and irreparable as the violence of a raging bull.

Reygadas and his wife, editor Natalia López, play Juan and Esther, a bohemian couple whose typically drama-free open marriage is put to the test by Esther’s new relationship with Phil, a nonchalant, burly gringo with whom Juan has a pre-existing and friendly rapport. Esther transgresses the bounds of their sanctioned affairs when she begins to keep secrets, causing Juan to suspect that she’s fallen in love. Reygadas, in a marked turn to a more traditional, linear narrative and dialogue-reliant characterizations, is less interested in validating the slighted Juan than he is in popping open new wounds. Jealousy and insecurity spill out into a canvas of rapturous imagery that hearkens to the spiritual breadth of his past work.

Esther and Juan’s confrontations, inordinately tense at first relative to the loving quiescence of the film’s lulling first quarter, veer into banal repetition — chipping away with painfully predictable displays of Juan’s fragile masculinity at the genuine love the couple once shared. An unspecified child narrator recounts off-screen events to an upbeat piano jingle reminiscent of Terence Malick’s narrator in Days of Heaven, lending a folkish fairytale twang to an otherwise adult affair. Beyond peeping tom shots of lovemaking through angled shutters or back windows, Reygadas’s menage à trois comes to bear in its epistolary mode, through a series of narrated letters between Phil and Juan that abound in righteous manliness and performative brotherhood. It only exacerbates the irony that Juan is a renowned poet, so capable of rich expression, yet fraudulent when he speaks of love as “the perpetual collaboration of the loved one’s becoming” through the filter of his ego’s insular demands. Reygadas affixes a camera to the bottom of an airplane flying over Mexico City for Esther’s only letter reading, a transcendent uninterrupted shot timed to a resonant tarmac landing at the conclusion of her recitation. “You know these men,” explains Esther in another scene, “You can’t get them off their damn ranches,” her lips slightly pursed, her gaze unfixed and distant with frustration so much as melancholy.