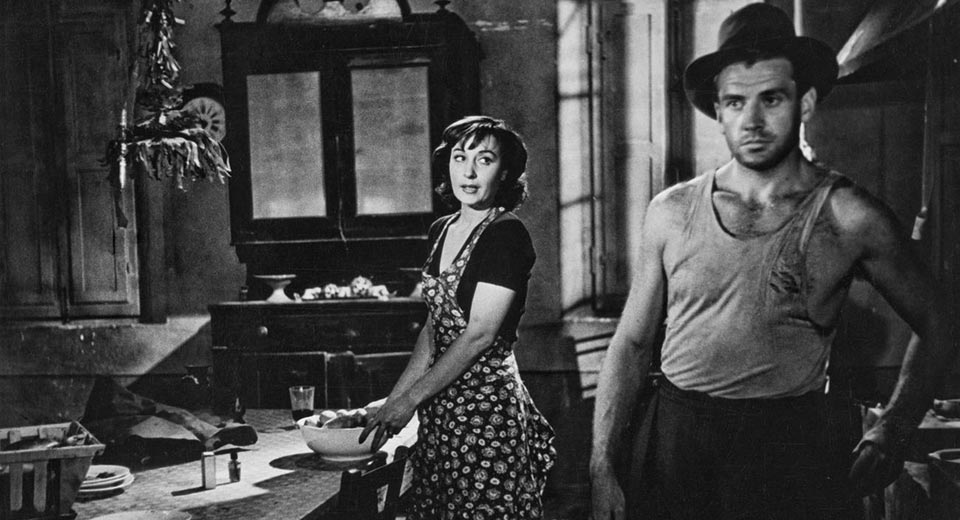 In a scene as erotically charged as 1940s cinema would tolerate, a mutual seduction stirs the moment vagabond Gino (Massimo Girroti) and lonely wife Giovanna (Clara  Calamai) lay eyes upon one another in Luchino Visconti’s Ossessione (1943). He begs her to abscond with him; she begs him to stay. Her affable, oafish husband, the proprietor of a roadside hotel, stands in the way of their presumed bliss. After they impulsively kill him, mutual mistrust and gnawing guilt doom the pair while the authorities slowly close in. Visconti’s debut feature, Ossessione was the first and most divergent screen adaptation of James M. Cain’s 1934 novella The Postman Always Rings Twice. It has the visual and thematic darkness of film noir, with the welcome additions of queer sexuality and neorealist attention to lower class minutiae.

Giovanna married the rich older man in order to escape a burgeoning career as a prostitute while Gino lives his life in a state of perpetual escape. Visconti encourages a reading alien to Cain’s original story by suggesting Gino’s struggle with bisexuality is the cause of his rootlessness. His passions seem genuinely roused by Giovanna, but he’s consistently seen using others to sustain his meager existence. His most authentic relationship is with a fellow tramp, nicknamed Lo Spagnolo, who disparages Gino’s pretense of a life lived indoors. In the film’s most tender scenes, Spagnolo beseeches his friend to acknowledge their shared, inescapable nature as wandering tramps while Gino seethes in confusion. Even after Giovanna announces a pregnancy and the two hastily commit to a future wrapped in domestic bliss, it’s impossible to take the central romance at face value. Theirs is an empty hope for normalcy made impossible by shared trauma. Visconti sympathizes with both characters as victims of the privileged heterosphere, but acknowledges the twisted mechanisms they’ve developed to survive. In this way, Ossessione has more in common with Fassbinder and Sirk than its noir-toned source material.