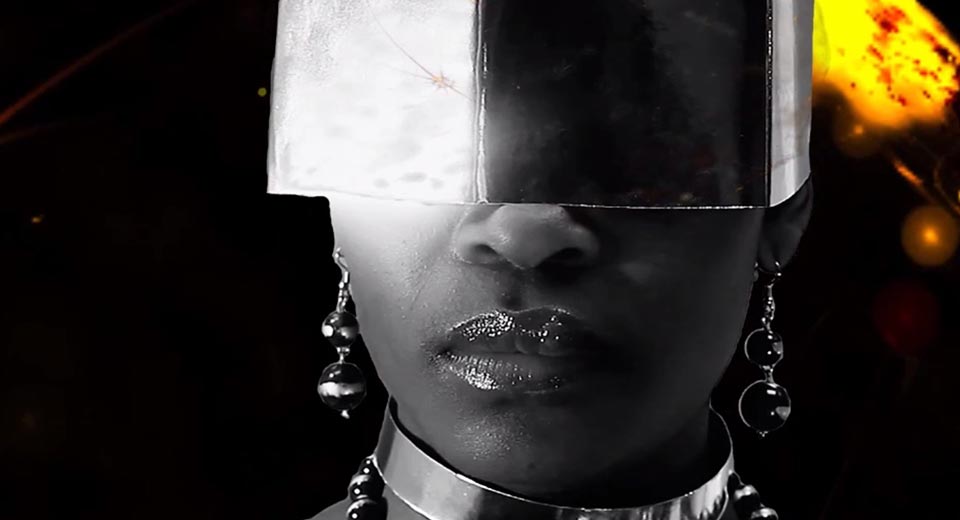 Cameroonian genre-bender Jean-Pierre Bekolo's most recent film Naked Reality (2016) is getting its New York premiere at Spectacle Theater this month. Either a long narrative music video or a short non-narrative sci-fi feature, Naked Reality is a fitting follow-up to Bekolo's 2005 sorcery-driven political thriller Les Saignantes, which has screened at multiple venues from Spectacle to MoMA.

Black-on-white title cards tell us it's 150 years in the future, and the world is knee-deep in the worst energy crisis it's ever known. People have resorted to praying to the gods to send energy to their loved ones and protect them from "energy-predators." The epoch is also menaced by a mysterious genetic disease called Bad Luck, which renders the people (all residing in the Sahara Desert, the only inhabitable place left) incapable of "fulfilling the mission written in [their] DNA." Wanita (Weza da Silva) is a young TV-hostess afflicted by this illness. Visual pollutants like TV, movies, and the Internet have made her reject her "real identity" in favor of younger and more beautiful versions of herself, all on screen simultaneously like a fashion show lineup. "Why are you so unhappy as who you are?" asks an ancestor tasked with reprimanding/curing her. The question remains open, but it clearly has something to do with Wanita's disconnection from her people's past. "Don't pray to other people's ancestors," she's told, and a francophone poet (Senegalese rapper Souleymane Diamanka) tries to make her absorb this tribal history directly by writing it on her body with a quill.

Formally, Naked Reality is at least as mysterious as it is narratively. Shot in ultra-sharp black and white, the sets are mostly photo-studio-looking exercises in minimalism, while the outfits include elements ranging from heaps of intricately geometrical jewelry to futuristic Mylar facemasks. Wanita driving through an unnamed, homogenously massive city is suggested through canted shots of passing highrises superimposed over shots of her miming a steering wheel. The main form of communication/entertainment technology is a phone- or tablet-sized plexiglass rectangle, and the whole environment has been rendered "smart" by covering all surfaces with them. These devices watch over a sterile, homogenous, and—most importantly—historyless Constant Present, and the effect is chillingly familiar.

All of Naked Reality's cold, haunting tableaus are accompanied by Congolese-Austrian Kimyan Law's hyperkinetic trap-inflected soundtrack, and much of the movie's modest runtime is spent watching Wanita move to it. If Naked Reality favors mood over narrative, that is one of its strong points.