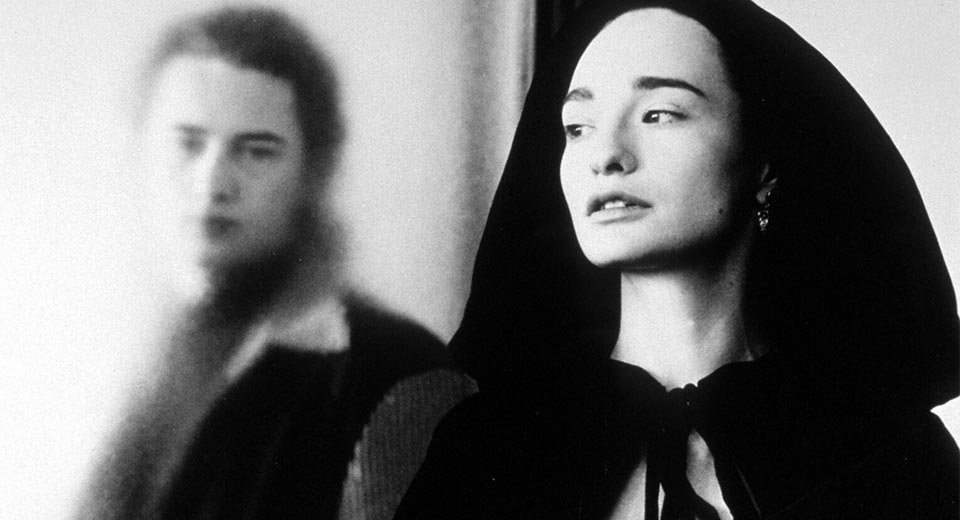 Michael Almereyda's 1994 film Nadja deadpans its way through a GenX deconstruction of the vampire myth as Dracula's twin children and their would-be victims try to find meaning, or even just momentary joy, in their existences.

The film is a loose retelling of Dracula's Daughter (1936), which picked up immediately after Dracula with the Count's unfortunate offspring trying to free herself from her father's shadow. But Nadja (played by Elina Löwensohn, who appeared in Almereyda's other slice of 90s NYC, Another Girl, Another Planet) isn't trying to become human – she embraces, even enjoys, her powers. Living a life of jaded trust-fund vampirism in the city, Nadja hits bars and clubs picking up victims with Irish boy toy Renfield in tow. She's a bored European expat seeking a better way to exist without knowing what it looks like.

With the specter of Lugosi's Count literally looming over Nadja's life, the film easily reads as a 'sins of the father' finger pointed lightly at Boomers. Nadja is a tangled family affair, and at the center is Jim, who abandons wife Lucy to bail his uncle Van Helsing out of jail for murdering a man who turns out to be Dracula. Peter Fonda spins the perennial vampire hunter as paranoid 70s burnout, and Lucy (Galaxy Craze) is a disaffected, flannel-wrapped tomboy with severe period problems. Even Dracula was suffering existentialism; talking to Jim about staking him Van Helsing mutters, "he was like Elvis at the end…drugs, confused…he was just going through the motions." Van Helsing rambles, while at another bar a lonely Lucy and Nadja find brief solace in each other's company, putting Lucy under Nadja's spell (and inheriting a disjointed, flightier version of her ennui).

Between My Bloody Valentine on the soundtrack, indoor smoking, and deliberately flat line readings about pet tarantulas, this is a movie so solidly of its time it almost works as parody of it, something Almereyda (who also directed 2000's Hamlet) seems to excel at.

Nadja's fitting namesake is likely Breton's book of the same name – both muse on love, and ways of living and relating to other people in same disjointed, dreamlike style. Pixelvision heightens the sensation, used mostly for vampire-vision and contrasted by lush 35mm black and white. Its pixelated texture simplifies and complicates, drawing viewers under Nadja's welcome spell as much as her victims.