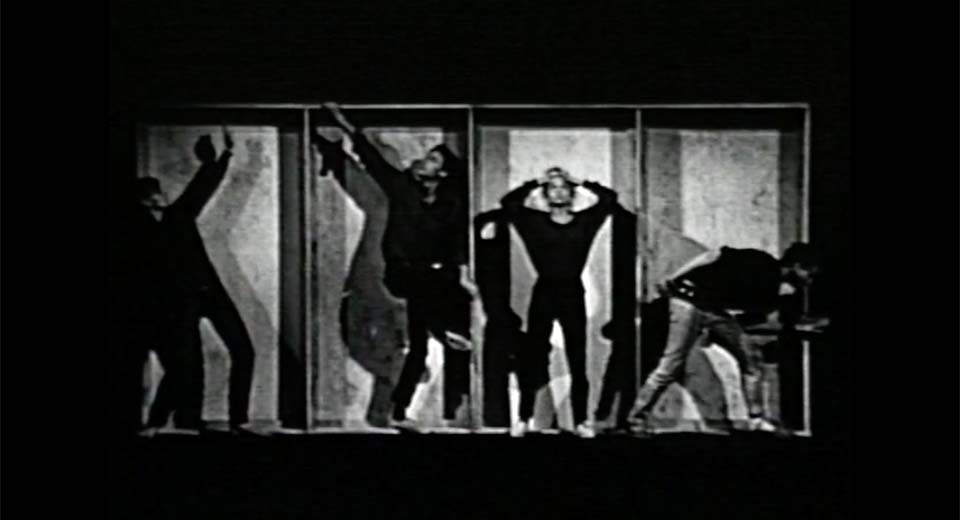 Jonas Mekas’ Mysteries is a film that takes as its subject not simply the performance it documents but the act of watching such a performance. The film truly begins with Mekas’ camera scanning what might be a playbill, then darkness and nervous laughter. The viewer experiences the uncertainty and gleeful vulnerability of sitting in a darkened theater before the stage lights reveal the performance. What transpires on screen is a largely unbroken experience of watching. Mekas’ camera zooms into the actions of The Living Theater founders Judith Malina and Julian Beck’s performers, but these moments of piqued interest are the result of an engaged viewer’s fluid thinking rather than ideologically motivated signposts leading to predetermined ideas. Philip Glass’s music (newly commissioned for the 2000 editing of the footage originally shot in 1966) drives this whirlpool of vision and thought with stirring force. The performance transforms through the unexpected movements and interactions of the performers and our understanding of how to view it transforms with them.There is a constant sense of curious and elated anticipation in Mekas’ film and the viewer is invited to breathlessly take part.

Mysteries troubles a commonly held belief about the nature of cinema. Early film is often understood as a process of discovering the medium’s possibilities as a new and independent art form, ideological tool, and capitalist commodity. One such reckoning with this new technology might seem naive or simplistic today—the decision to film a stage performance. The prevailing understanding of what cinema would become runs counter to this impulse but what we believe to be the medium’s inherent possibilities now, the deconstruction and reconstruction of time and space through editing and a phantasmagoria of perspectives, are, nevertheless, violent and calculated ones.

Mekas’ film show us that these historically accepted dichotomies, the cinematic (montage) and anti-cinematic (theater), are not as rigid as we might think. In Mysteries, Mekas makes a simple decision not to cut, and by this decision his film opens up a world of deep feeling and transformation. There is a word that describes simple artistic decisions which yield great beauty and a deeper understanding of what it means to be human: poetry. Mysteries is a delicate work of poetry by one of the cinema’s greatest.