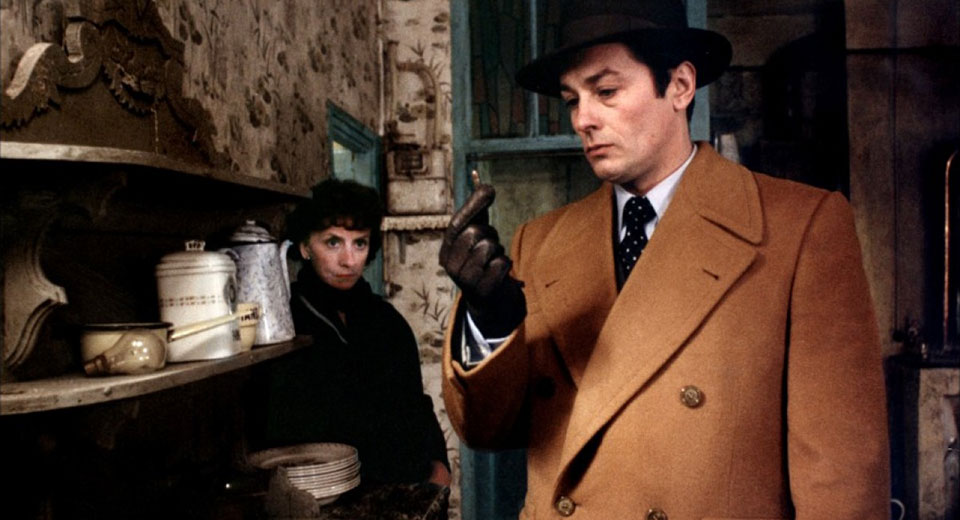 A gruesome medical examination, conducted in painstaking detail and concluding with a fatal prognosis, sets the appropriately sinister tone of Joseph Losey’s Mr. Klein, opening this weekend at Film Forum for a two-week revival run. In his first Francophone effort, the American-born Losey eschews le Capital’s oft-depicted, sun-dappled streets for rain-slicked stones and gunmetal skies – the fated backdrop of a Paris that yields not to lovers’ caresses, but instead to the creeping erosion of its most-cherished institutions. An invasive species has manifested itself in every arrondissement, but the exact name of these unwelcome interlopers depends entirely on whom you ask: some skitter about under upturned coat collars and low, brimmed hats – others march past in oily helmets, polished brass, and clattering boots.

Weighted by a fog of subterfuge, the numerous bureaus, the trustworthy Gendarmerie – in short, the Republique, once infallible – are beginning to buckle, and otherwise unfettered Frenchmen are feeling the chill. Thriving in this malodorous clime is urbane art collector Robert Klein – played with dead-eyed nonchalance by star-and-producer Alain Delon – who has managed, despite two years of foreign occupation, to maintain an otherwise easy going lifestyle in his very tastefully decorated apartment. Klein is a dealer who specializes in the “short” sale, to put it politely, and his relatively lax sense of fraternité has landed him squarely in the catbird seat. The current political climate has cultivated a buyer’s market for family heirlooms, fine homes, and pricey favors – and Mr. Klein, like his willfully ignorant countrymen, can’t afford to ask too many questions.

Questions come for Klein soon enough, however: a mysterious periodical arrives for someone named Robert Klein, at Mr. Klein’s tony address – but could this incriminating journal really belong to a man with such bonafides: “French and Catholic since Louis XIV!”, per his cantankerous father? Desperate to clear his good name, Klein strikes out in search of his doppelganger, inciting an increasingly convoluted and terrifying chain of events – the kind of state-sanctioned, anxiety-inducing episodes that would be considered laughably Kafkaesque, provided they remained the stuff of fiction.

At its heart, Mr. Klein is a detective story, with the highest possible stakes: a treasure far more precious than stolen emeralds or prized real estate. Without an identity – or, specifically, the immunity that only the right identity can provide – Mr. Klein, cultured art collector, is doomed to begin the familiar and fatal transition from French citizen to stateless undesirable. Each step toward the truth tightens the noose, until total subordination and suffocation finally, devastatingly seal the last remaining exits. While gun towers and cell blocks rise along the periphery of his otherwise staid existence, Klein’s myopic sojourn drags him further from surety and safety – and deeper into the teeming hordes destined for a purgatory of airless cattle cars and barbed-wire camps.