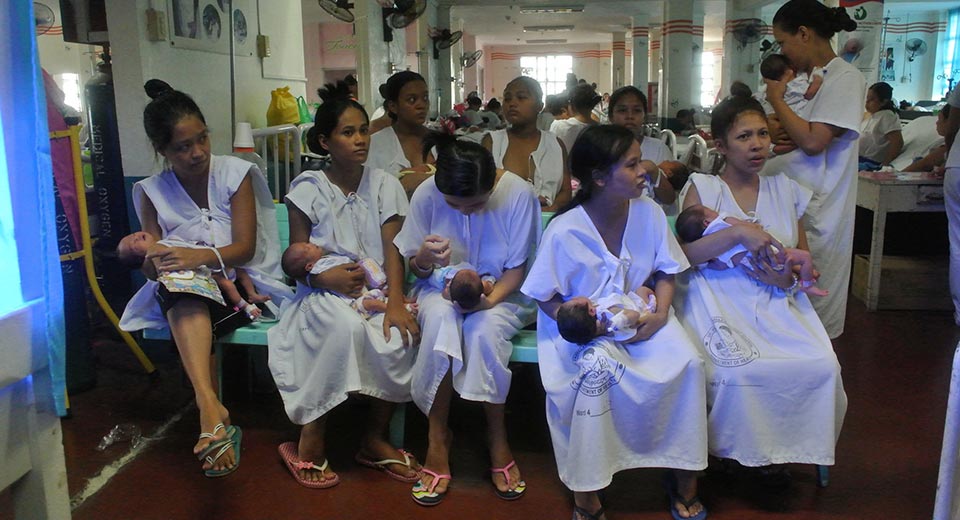 There is only one word to describe Fabella, Manila’s national maternity hospital: Kafkaesque.

Imagine a hundred wailing newborns and their mothers packed into a single room the size of a basketball court; these patients sleep four, sometimes five to a bed. The doctors and nurses refer to them by number, not by name: “585,” “586,” or “587.” A bewildered young mom refers to her twins as “A” and “B.” Women give birth in quick succession and in very close quarters—an open floor partitioned with curtains on vintage hospital beds, or in one case, on a stretcher in the corner of the waiting room—literally pressed up against the corner of the wall for support in lieu of a bedframe and stirrups. “Baby out!” the doctors call, “baby out!”

Despite the shocking nature of these images, Ramona S. Diaz’ Motherland manages to maintain a lighter tone than one might expect from a verité doc set in the busiest maternity ward on earth. Just as Kafka’s Metamorphosis is at once absurdly funny and disturbingly sad, so too, this film about what to expect when you’re expecting—as an impoverished woman in the 6th largest city in the world. I won’t spoil it for you, but after seeing this film, you’ll never look at a tube top in the same way again.

Premiering tonight as part of MoMA’s A New Golden Age: Contemporary Philippine Cinema series, Motherland has that rare quality of riding the fine line between comedy and tragedy; between the universal and the particular. The film serves its audiences twofold as both a portrait of early motherhood and the story of a nation struggling to survive under the pressure of tremendous social and economic inequality. It’s is the kind of film you should see with… well, your mother, if you can. Who better to share the immersive, cinematic equivalent of delivering a baby (actually, hundreds of babies) with than the woman who delivered you? You’ll laugh, you’ll cry, and you’ll find yourself in awe of the miracle and resilience of human life. What more could you ask from a movie? “Baby out!”