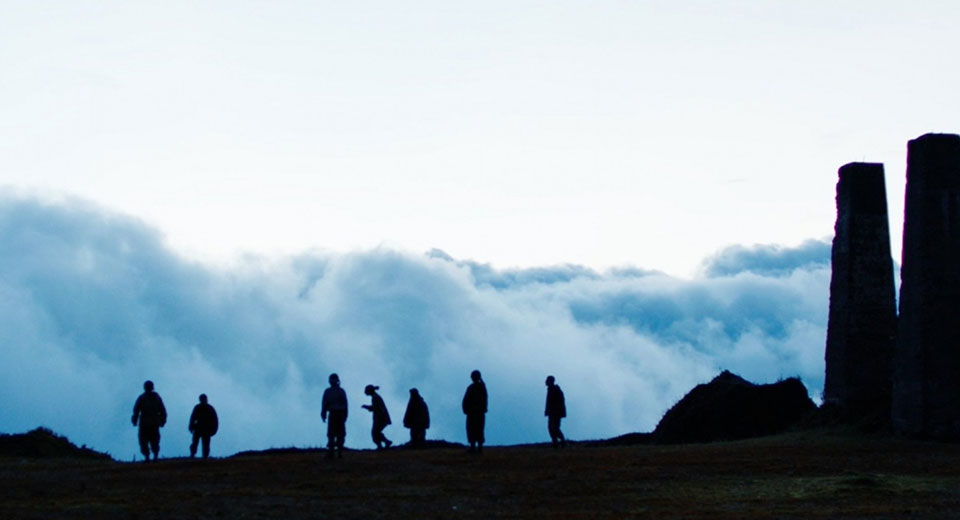 In Alejandro Landes's coming-of-age war film Monos ("monkeys"), adolescent guerrillas camp out in a Colombian jungle and become more and more feral with every sleepless night and every foraged handful of psychoactive mushrooms. Sandwiched between a civilization with no place for them and a war they don't understand, they escape ever deeper into the inhospitable forest and get ever more hopelessly lost in their shifting internal loyalties.

Rambo, Smurf, Dog, Swede, Wolf, Lady, Bigfoot, and Boom Boom are a teen squad serving the mysterious "Organization," a paramilitary force fighting government troops in the Colombian rainforest. The nature of the Organization is deliberately opaque; whether they're a branch of a cartel or a communist liberation army is left open. Landes sees war as a scrambler of ideological coordinates, a chaotic night in which all cows ultimately turn gray: "At the end of the day, when they're fighting in the trenches, they're not discussing Marxist philosophy or Capitalism,” Landes told Cinema Tropical. "This isn't the romantic version of the front lines where you're wielding a weapon. You're watching from the backside, shitting your pants, which is how most people experience war." Landes’s comments place Monos on a continuum of works of art about the hell of war stretching from Goya to Remarque to Stone. The filmmaker has cited Lord of the Flies (1963) and Apocalypse Now (1979) as direct influences, so the senselessness of war and the ferocity of children are legacy themes. But throw in the pain and confusion of adolescence and the Hobbesian state of nature, and you've got something like Kids meets Lost.

Monos may be an unflinching portrait of a group of child soldiers undergoing the trauma of civil war, but it's also filled with wry humor. The gang is tasked with caring for a dairy cow named Shakira; their American hostage looks wistfully at a newspaper headline that screams "DEFORESTACIÓN" right after having nearly died trying to escape through the dense jungle; and Rambo gets a glimpse of the kind of stable domestic life he's supposed to envy and sees a glassy-eyed family watching a TV documentary about the history of gummy bears. There's also a refreshing gender ambiguity to these teens (boys in dresses, girls in motorcycle body armor) and so much making out that I hope the cast didn't have to deal with the other kind of mono.

Monos opens today at Angelika Film Center and The Landmark at 57 West. Director Alejandro Landes and actors Julianne Nicholson and Moises Arias will participate in Q&As at Angelika on Friday (8:00 pm) and Saturday (5:20 pm), and at the Landmark on Saturday (7:15 pm) and Sunday (1:15 pm) as noted on Screen Slate. For tickets and additional showtimes throughout the film's run, please visit the Monos website.