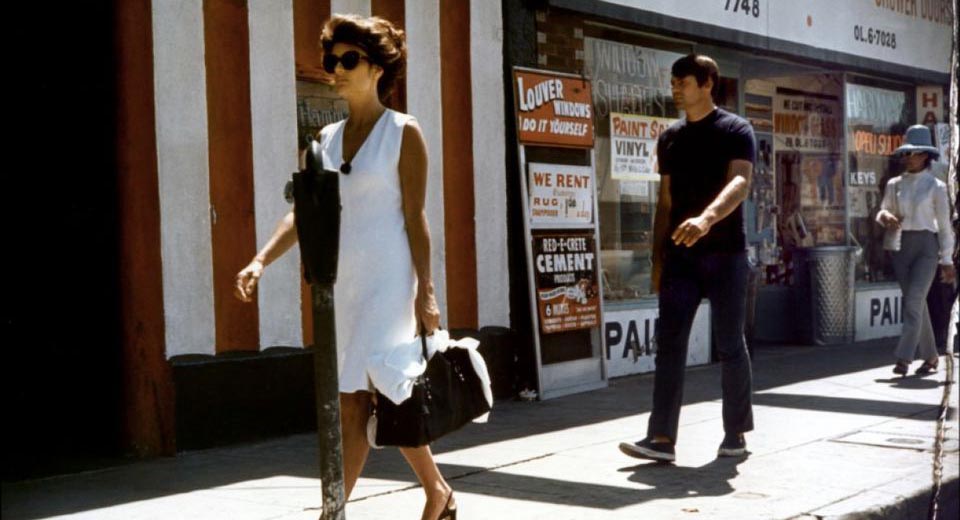 The basic premise of Jacques Demy’s American debut, Model Shop, doesn’t immediately hint at a work of minor genius. If anything, the film looks downright banal on paper. Gary Lockwood (Demy’s second choice after Harrison Ford – look it up!) plays that too-familiar type: an aimless young man, wet behind the ears, yet already world-weary. But Demy, still flush from the success of his iconic francophone musicals, elevates what could have been a lesser New Hollywood sad-dude drama into a plaintive and intimate film about the ennui of merely existing in L.A.

Lockwood’s George is a mod-ish update of Joe Gillis, a kept man who bristles at the thought of matrimony and refuses to get a job. Instead, he lingers in an anxiety-driven statis, mooching off his ingenue girlfriend until his “big break” – or draft card – comes in. “Who’s going to give a million dollars to a guy of 26, just because he has ideas?” she laments, breaking up over breakfast. George has quite a lot to say about his noble trade (he’s an architect), but a dearth of drive. In a nod to his Sunset Boulevard analog, an early morning visit from the repo men spurs George to hop in his sporty MG and take to the streets.

Like many members of the “Los Angeles Plays Itself” family, Model Shop’s finest moments happen behind the wheel. George takes us on an impromptu tour of mid-century SoCal; cruising past oil derricks, ornately-decorated car washes, and tropical motels to the strains of Rimsky-Korsakov’s Scheherazade or Billboard pop, dropping in on friends or chatting with the filling station attendant. The plot thickens when he spots mystery brunette Lola (Anouk Aimée), transplanted to Los Angeles from the expanded Demy universe. As their doomed romance waxes and wanes, Model Shop’s trance-like hour and change drifts by like a nap on the beach, gently holding you in a dreamy purgatory of ambient soundscapes, soft boys, and softer palettes.