Meriem Bennani: Party on the CAPS 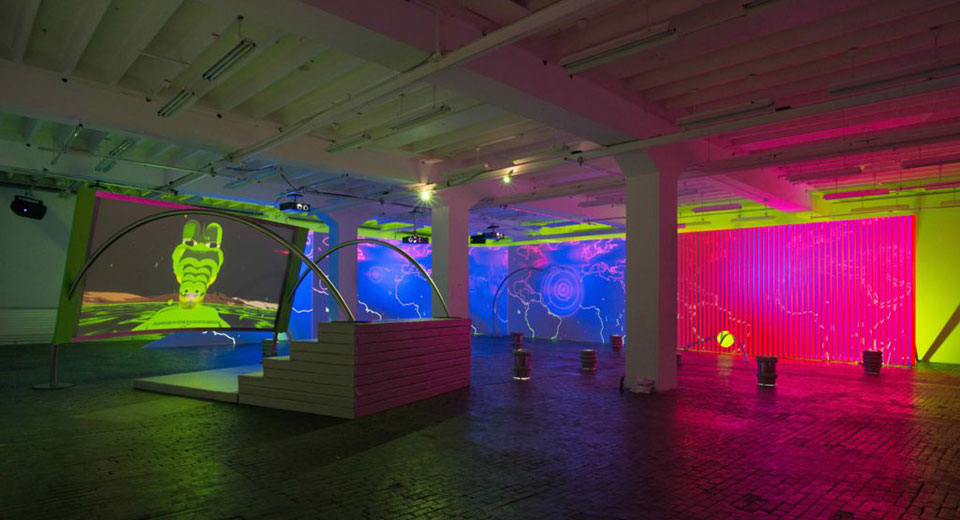 "Remember when teleportation replaced airplanes?" a crocodile chirps, floating on its back in a dark, oily morass. This technological revolution apparently did not coincide with a political one. American "troopers" are still tasked with apprehending undocumented migrants, snatching their disassembled molecules out of thin air and installing them indefinitely on a domed mid-Atlantic island known as the CAPS (short for "capsule").

This sets the scene for Meriem Bennani's Party on the CAPS, on view at Clearing Gallery through the end of the week. The CAPS has become a multinational, multi-generational detention camp for displaced persons, with more arriving every day. To be arrested while teleporting is as traumatic as you would guess, and a host of ointments and vitamins are imported from the States to palliate the ailing prisoners. Bennani's mother, a real-life pharmacist and pathologist, also plays one here on the CAPS. Her own mother's 80th birthday is the occasion for the titular party, at which she will debut a youthful new look, the product of an extensive rejuvenation procedure.

Shot in the artist's home city of Rabat, Morocco, the 30-minute video channel-surfs between pirate frequencies, surveillance footage, and documentation of the raucous celebration. We spend time with the party’s MC-for-hire as he slurps harira, flips off a trooper, and dispenses a longish musical interlude about a food vendor who once invoked his ire. Eventually, we land on the nightmarish, static-riven eyes and mouth of ZIP, a user interface promising an illicit escape from the CAPS, suggesting we "sign the lease" on a new body in Florida.

In this future, we will project videos, play solitaire, and transfer money with our eyeballs, an effect Bennani renders delightful with her signature flair for post-production. Perhaps to further approximate the insectoid multiplexing of ocular tech, eight channels of video (most of which serve to magnify or otherwise accentuate the same material) are installed among cartoonish metallic stage setting. The introduction is best seen from a "croco pleather" foam ziggurat. In the main room, stovepipe lighting fixtures double as woefully uncomfortable stools and an oversized faux-magnifying glass isolates a section of the image for close inspection.

With alternating strokes of gravity and levity, Bennani riffs compellingly on cyberpunk diasporas, dysmorphic fantasies of bodily divestment, and the disparity with which the future is distributed. Her installation executes its premise without exhausting it. The world of the CAPS must be built by the viewer as it is by its inhabitants – out of scraps, their jagged edges primed for imaginative cohesion.