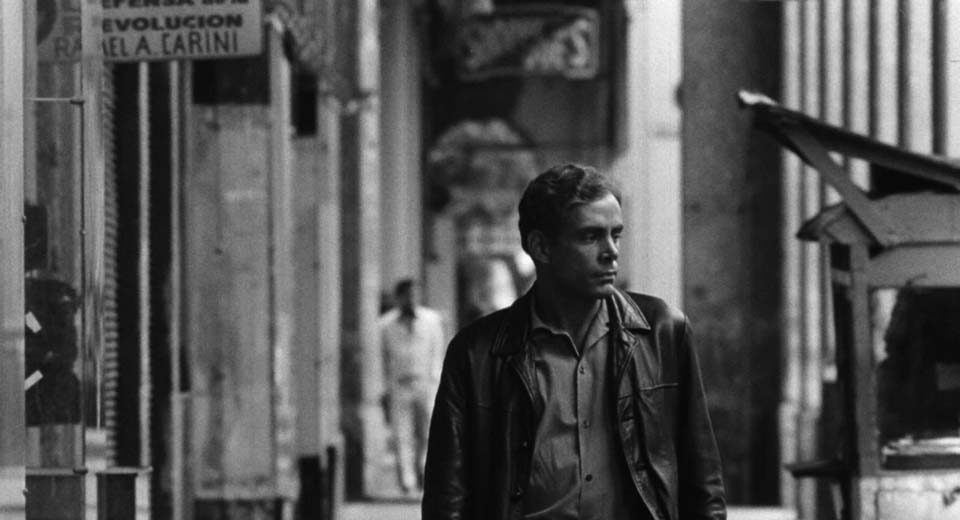 Today Film Forum begins a 50th anniversary run of the recently restored Memories of Undevelopment,  Tomás Gutiérrez Alea’s chronicle of a shiftless bourgeois Cuban intellectual’s post-revolution blues. It opens in an airport as Sergio Carmona Mendoyo’s (Sergio Corrieri) wife and family depart for Miami, where Sergio speculates that “she’ll have to work… at least until she finds some dumb guy who will marry her.” He’s wedged between feelings of equal cynicism toward pre- and post-revolutionary Cuba, both abhorring colonial conditions (despite seeming to suffer none of them himself) while remaining pessimistic about the prospects for Castro’s government. (“They’ll fall into barbarism and starve like the Haitian.”) He bides his time walking the streets, attending lectures, and, above all, chasing teenaged girls. Alea, who studied film in Rome, renders the film in a neorealist tenor punctuated with fleet-footed newsreel montages in the vein of his contemporary Santiago Álvarez and revolutionary forebearers like Esfir Shub.

Memories of Underdevelopment caused a sensation as one of the first post-embargo films to premiere in the United States in 1972, being hailed as a “clearly a masterpiece” by Newseek’s Arthur Cooper and “a miracle … cosmopolitan in style” by Peter Schjeldahl in the New York Times, whose Vincent Canby also placed it in his list of the year’s best, marveling that it “never slips into the bored and boring attitudes that wreck Antonioni’s later films.” After showing in New Directors/New Films, it was seized by the Treasury Department at a festival of Cuban films that had already been interrupted by an anti-Castro stink bomb attack. Subsequently, Underdevelopment’s critical reception has been examined nearly as much as the film itself, much of it focusing on the often backhanded (if effusive) praise resulting from evidently narrowed expectations; surprise at its character's sour attitude toward Castro's government; and, further to that aspect, lack of recognition of the filmmakers' critique of his perspective.

Though such critique may have escaped some critics entirely (yet not diminished their praise), it seems fair to hold a degree of skepticism about the nature and extent of the filmmakers' willingness to frame Sergio in a negative light. That is to say, it’s easy to understand how Sergio is an unremitting misogynist and anti-Afro-Cuban racist; but, as is curiously the case in a lot of revolutionary art, not so easy to grasp the supposed systems of embedded self-critique, which seem to me primarily based on the faith one is expected to place in the enlightened attitudes of the filmmakers. Nevertheless, it’s stylistically unimpeachable—and apparently, as greater minds than mine have put forth, not as boring as Antonioni.