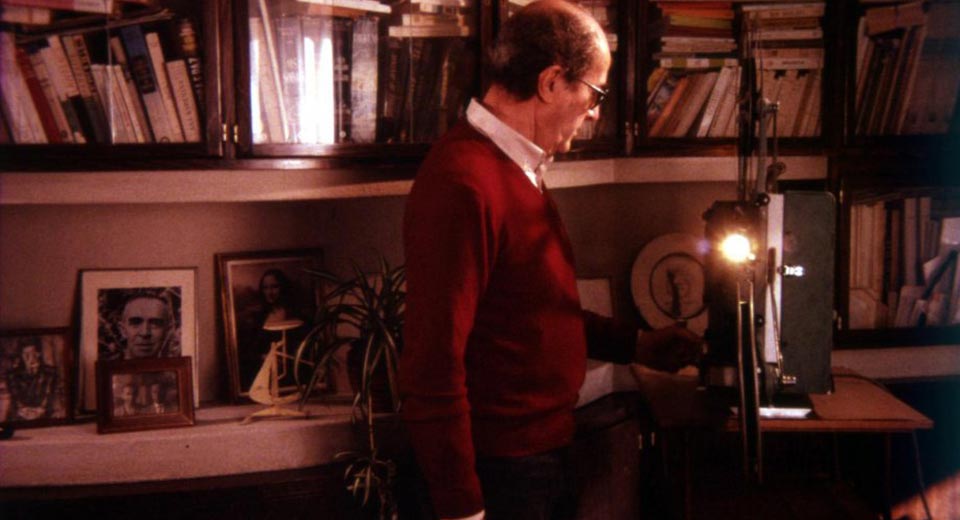 Screening as part of Anthology’s Documentarists For A Day series, Visit, or Memories and Confessions announces itself plainly as “a film by Manoel de Oliveira about Manoel de Oliveira, on the purpose of a house,” a statement cleanly sidestepping the raw emotion motivating the film’s creation. As framing must be raised before a house is built, the framework necessary for a movie’s existence, normally hidden from view, opens the film as Oliveira notes its funding sources, groups beholden to, and collaborators, before moving on to the film proper.

Point-of-view ellipses of strangers invited to but encroaching on an unfamiliar home intersperse a straightforward personal history, the two separate works occupying the same space without quite touching. The floating segments are Visit, a meditation on the specific home from writer Agustina Bessa-Luís (whose novels Oliveira later adapted into several feature films), lightly overlapping Meditations and Memories, Oliveira’s direct audience engagement reflecting on his life, work, and family. The space is Oliveira’s home of forty years visited the day he lost it, sold to avoid foreclosure and pay off debts.

For a film about a man confronting his own mortality, what he then thought was the sum total of his life’s work, and forced to leave the space he’d created for both, the film has no trace of mawkishness. It’s straightforward, pragmatic even, in laying out the lives and locales that led to this abode we’re floating through. Places are introduced with the same care and detail as siblings and spouses, including Oliveira’s description of the prison that held him after the PIDE (a national security agency devolved into secret police) dragged him ill from his bed.

At the start Oliveira says with stoic finality, “Maybe I shouldn’t make a film like this. But it’s done.” Yet the story has a happy ending; 73 years old at the time, what Oliveira thought might be a final film reflecting on a stunted career turned out to be the start of an extremely fruitful and well-received period of work that only ended with Oliveira’s death at 106, the oldest active filmmaker until that point. Oliveira requested Memories and Confessions not screen until after his death; given the film’s honesty in capturing his personal nadir it’s understandable why, but with the film’s release, Oliveira’s instinct to preserve his intimate environ is proven sublimely correct.