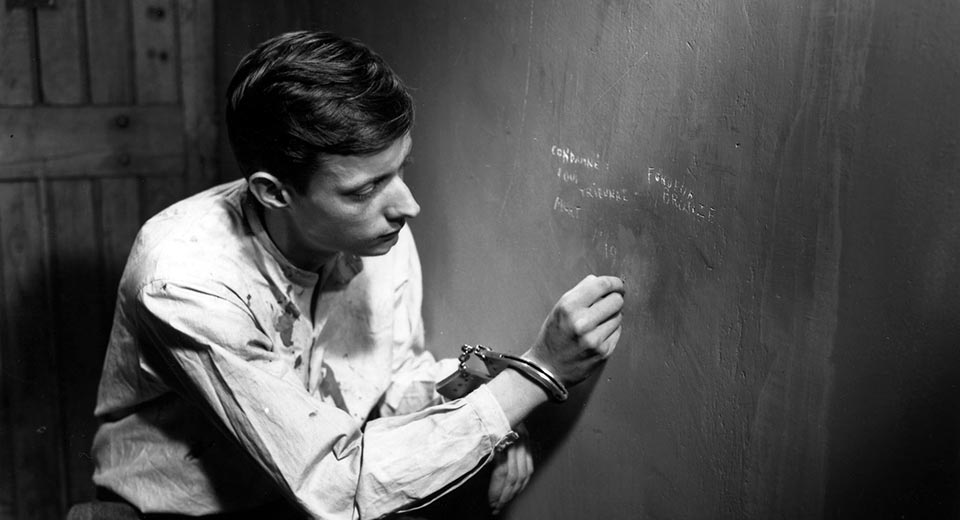 The first of Robert Bresson’s “instructional” films about crime, A Man Escaped (1956), is more morally digestible to liberal audiences than Pickpocket. Fontaine (François Leterrier), a Resistance fighter imprisoned for anti-Nazi sabotage, doesn’t need redemption because his crime is justified (after all, the regime that calls his act a crime is itself criminal). Audiences may feel sympathy for Pickpocket’s Michel, but only because “No one’s as bad as their worst day.” Even if both men’s crimes are acts of rebellion against a political order that represses them, Michel’s is not likely to be granted the dignity of this label; after all, Hitler and the Gestapo were more obviously bad than de Gaulle and the Sûreté Nationale. But the Law is the Law—whether punishment is meted out by an authoritarian regime or a parliamentary one, it still sucks.

A Man Escaped is based on decorated war hero André Devigny’s escape from Klaus Barbie’s Fort Monluc prison in Lyons in 1943. (In an instance of historical irony, Barbie himself got locked up there after his arrest and extradition from Bolivia in 1983.) The film was partly shot at the prison and Devigny personally acted as technical advisor. Bresson himself had been a POW for nine months sometime between 1939 and 1941 (the details are hazy), an experience that doubtless gave him a special bond with Devigny.

In his study of the political dimension of Bresson’s films, Brian Price claims that instead of sympathetic portraits of desperate people, Bresson produced “cinematic blueprints, instructions for a socially motivated practice of crime.” His films are meant to be imitated, not just admired. A Man Escaped is certainly not a thriller; any possibility of suspense is foreclosed by the title (at least the original Un condamné à mort s'est échappé) and the past-tense voiceover narration, both of which tell us from the start that Fontaine makes it out alive. It’s not about what happens but about how, method over results.

Fontaine’s dextrous hands are the star of the movie: we see them sharpen a spoon on the floor of his cell, pry wires from his bedframe, twist strips of his blanket into ropes, and bend a lantern’s frame into a grappling hook. All the while, with unabashed word-image redundancy, Fontaine gives us precise step-by-step instructions in a patient, analytic voiceover. The particulars of escaping from a Gestapo prison may not be of much practical value to contemporary viewers who face much more sophisticated incarceration technologies, but the spirit is the same. When explaining his motivation to a skeptical cell-neighbor, Fontaine sums it up with the words “Lutter et espérer,” to “Struggle and hope.” While his priest prison-mate’s hope consists in praying, Fontaine’s consists in preparing; his faith is not in the Creator but in his own creations.