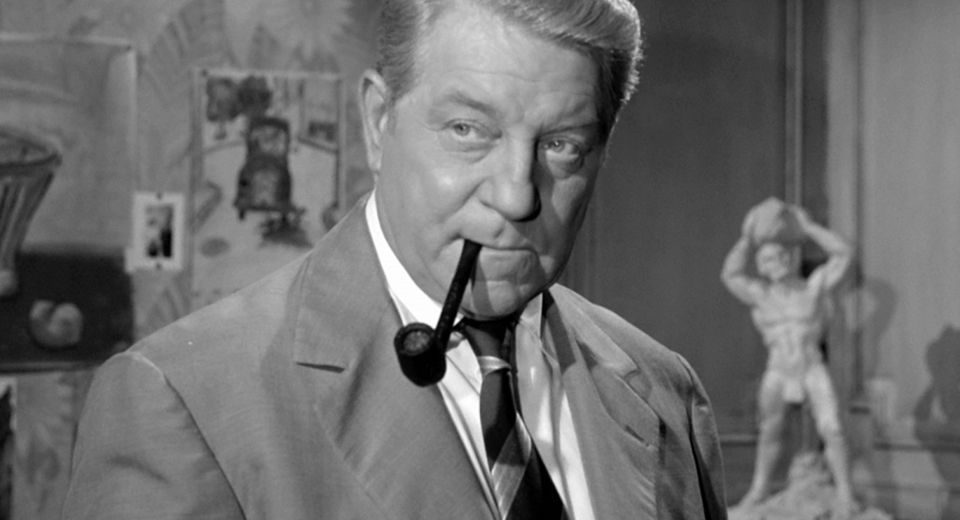 Kino Lorber has just restored Jean Delannoy's 1958 adaptation of Georges Simenon's Maigret Sets a Trap,  one of the notoriously prolific Belgian crime writer's novels starring the eponymous bon-vivant police inspector, played here by a mid-comeback Jean Gabin. Gabin had fallen out of the spotlight during the war and was cast as French literature's most famous law-enforcer a few years after Jacques Becker's Touchez pas au grisbi and Renoir's unflatteringly Technicolored French Cancan had given him a second chance. Gabin went on to reprise the role twice, once again for Delannoy in 1959 and then for the even more forgotten-by-history Gilles Grangier in 1963.

Maigret, by now clearly worn out and ripe for retirement, receives a personalized cut-and-pasted taunt from a serial murderer known in the tabloids as the Marais Killer. His M.O. is to stab short-statured, "well-built" brunettes in the chest and shred their dresses. The slasher turns out to be one M. Maurin (Jean Desailly), a mommy-complexed architect who instead of growing up developed a pathological hatred of "sluts" who resemble the young cashier his father once had an affair with (this is not a spoiler; its obvious from the way the guy plays with the belt of his bathrobe when nervous—pay attention to it!). The mystery is not particularly chewy, and the movie's attraction lies less in narrative ingenuity than in its geographical specificity. The first murder happens in the quaint Rue des Rosiers in the 4th arrondissement, the police prefecture is on the central Quai des Orfèvres in the 1st, and the socially-upward-striving Maurin prefers the Quai Blériot in the high-bourgeois "ghetto for the rich" of the 16th arrondissement to the shabby Rue de Turenne in the Marais, historically an actual Jewish ghetto.

To solve the case, Maigret turns into a metteur-en-scène. To deflect attention from the investigation and to throw off the real culprit, he hires a fall guy to appease the press. Maigret tells him he wants a "realistic, low-key performance," but the guy has too much thespian verve and hams it up with manic grins and bulging fanatic eyes. Later, in what has to be an exclusively Gallic tradition, the murder is reenacted at the actual crime scene. It becomes a neighborhood event, with every baker and barber canceling their moviegoing plans to take in the spectacle.

The miraculous Maigret, with his unhoodwinkable analytic acumen, is amply matched by his creator. Georges Simenon wrote 75 Maigret novels (and over a hundred "serious" novels, of which his physician forbade him to write too many per year because of their detrimental effect on his blood pressure), many of which became movies (including adaptations by such heavies as Julien Duvivier and Jean Renoir). He spent exactly eleven days on each novel (one day per each chapter, then three days to edit), an exceptional application of the Protestant work ethic to one of the so-called "creative" professions.