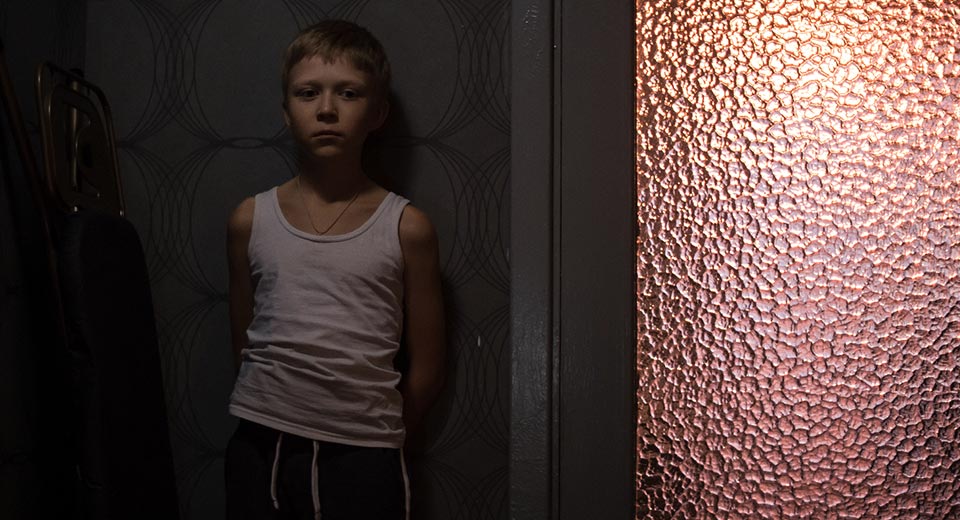 Andrey Zvyagintsev’s main preoccupation is the fate of the family in the new Russia, a theme he explores through his locales.

Both Elena (2011) and Loveless (2017) spend a good deal of time in clean, wealthy domestic spaces before showing us their obverse. Elena’s heroine lives with her second husband in spacious comfort, while her son’s family inhabits a cramped apartment in a run-down highrise. From abundant natural light and birdsong to spray-painted dicks and drunk teenagers, the contrast is stark enough for a New Deal-era issue film, but Zvyagintsev doesn’t go for easy morality. Elena begs her rich husband to pay for her grandson’s tuition to help him avoid conscription, but the husband dismisses her pleas with a grunt. When she finally succeeds, her son’s family is ungrateful.

In Loveless, this lack of familial sympathy reaches new heights. A young couple have a ten-year old son. Their marriage verges on dissolution. Both blame the kid for their misery; his birth was accidental and they never accepted him. They threaten him with military school and tell him to man up when he cries. Soon the kid runs away and the parents don’t notice until two days later. The police are powerless and uninterested, referring the parents to a volunteer-run search-and-rescue team. Like in Sergei Loznitsa’s A Gentle Creature (2017), also included in MoMI’s series, the official bureaucracy is broken and useless and the only hope is the goodwill of non-profits.

We go from the inert calm of the parents’ fancy apartments to the kid’s hideout, an abandoned Soviet-era school building with crumbling plaster, piles of rusting chairs, and broken windows admitting the elements. Zvyagintsev’s reputation as Tarkovsky’s heir is probably nowhere more deserved than in these long takes of interiors poetically mixing with exteriors.

Any director from a country in “turmoil” is expected to be “political.” Zvyagintsev is guilty as charged, but Loveless is not as “moralistic” and “on-the-nose” as Cineaste’s Robert Koehler suggests. Snippets of newscasts about legislation to restrict apocalyptic propaganda and about Russian inhabitants of the Donbass under Ukrainian artillery fire are the only explicit mentions of a political reality outside the central couple’s rather stiflingly individualistic problems. Of course, portraying contemporary Russians as hopelessly selfish, with superficial longings for wealth and youth, is clearly a political statement, but the same can be said of characters in any movie that takes place in a society.