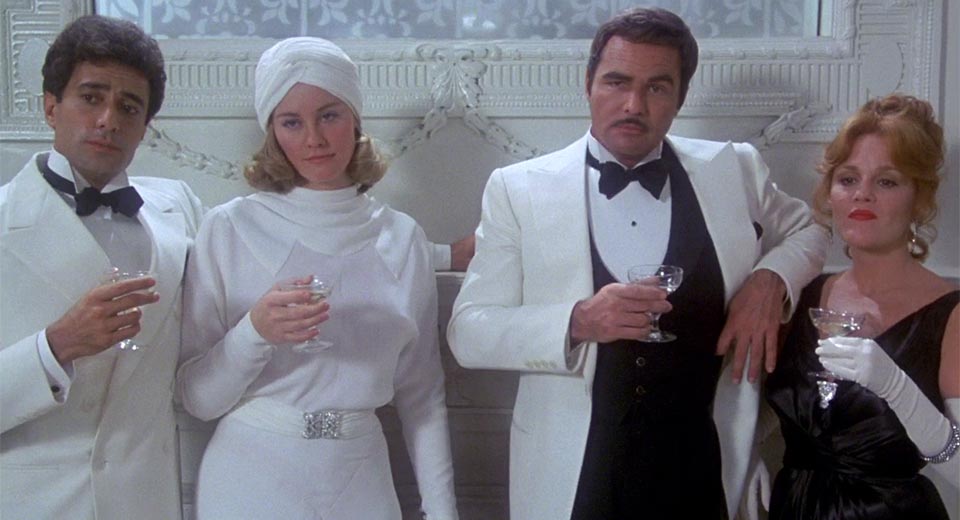 There is perhaps no subgenre that frustrates like the "auterist musical." It's the formula that some naysayers suggest sunk the '70s American cinema stride: a critical darling uses their clout to produce a costly homage to the tight choreography and art direction of studio filmmaking, in the process exorcising the very grit that got them there. A certain old guard like, say, Vincent Canby can't help hide his dismissiveness when reviewing films like Scorsese's New York, New York ("a film buff's essay on a pop-film form that was never of the first freshness") or Coppola's One From the Heart ("less a movie than a piece of real estate".) But time has been kind to these films, as it has been to its fellow late New Hollywood bombs Ishtar and Heaven's Gate—and it's overdo the same correction be made to Peter Bogdanovich's At Long Last Love, the original overstep. It plays this afternoon at the Quad in a career-spanning Bogdanovich retrospective, with the director in attendance.

Conceived by it-couple Bogdanovich and Cybill Shepherd, the film harkens back to the pre-war musicals of Ernst Lubitsch or Fred Astaire, soundtracked by the songs of Cole Porter. Shepherd is joined by the neo-vaudevillian Madeleine Kahn, the recently departed Burt Reynolds, and Duilo Del Prete in a barebones, trading-partners comedy-of-manners. Insisting on formal specificity, Bogdanovich recorded the singing live to great effect, a technique that hadn't been used in a musical for more than three decades. Critics were unconvinced by Shepherd's mid-American nasal singing voice and Reynolds' stilted dance presence, but their purported clumsiness carries it, along with inspired numbers like Kahn's "Find Me A Primitive Man" and the meticulous art-deco set design.

The film suffered from Bogdanovich's media overexposure: audiences were exasperated by details of his and Shepherd's tabloidal affair and his unprecedented public-facing fame, bolstered by guest-host appearances on The Tonight Show. As the director himself is quick to point out, the theatrical cut was rushed and ineffective. It was not until the late '00s, when he was inspired to rewatch the film on Netflix home-streaming, that Bogdanovich realized the television version was both far superior and not his own. Violating the filmmaker's final cut privileges, a rogue Porter-loving Fox editor named James Blakely had quietly recut the film according to the original shooting script, providing the inspiration and model for Bogdanovich's recent director's cut.

While I think the film will play to contemporary viewers as an uncontroversial delight, I must also admit its reputation as a disaster adds to the contrarian appeal. I recently tuned into doltish neo-con John Podhoretz's long-running, embarrassingly one-sided Twitter feud with Richard Brody, where he variously refers to the New Yorker critic as a "pretentious blowhard idiot," "the most pretentious AND dumbest movie critic who has ever lived," and "the worst writer in America." His most recent line of attack was over Brody's generous capsule review of At Long Last Love, calling him an "insane lunatic" and unleashing a cavalcade of #MAGA-loving Ishtar-haters in the comments. The fact that spectacularly failed films like At Long Last Love continue to have the capacity to 'trigger' speaks to their potency, still able to puncture the prestige narratives we tell about American filmmaking.